I received an ARC for review. 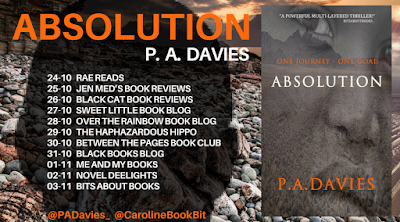 I'm delighted to be sharing my review on the blog tour for Absolution by P.A. Davies. First of all let's take a look at the description for the book. 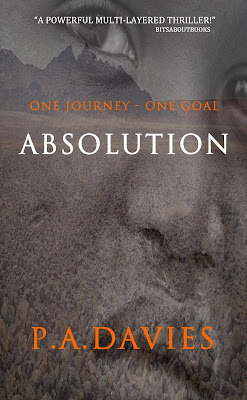 When the Militia entered the peaceful village of Nyanyar Ngun, South Sudan in 1992 - amidst the backdrop of a bitter civil war - it wasn’t in peace.
Soldiers of the SFL committed untold atrocities in that small farming village and from a line of terrified children, boys were chosen to become recruits of the Militia, whilst girls were taken for selling within a market of odious buyers.
Those who weren’t selected were either left to perish or murdered where they stood.
In a field of high maize next to the village, sixteen-year old Jada lay hidden and afraid, witnessing the merciless slaughter of his parents and the capture of his sister Kiden; powerless to stop it, too frightened to try.


But now - tortured by grief, consumed with shame and driven by guilt - Jada must embark on a long & arduous journey to rescue his sister from a sinister world and earn his absolution … or die trying!

P.A. Davies writes in a descriptive way that easily puts the reader right there with the characters, the opening was harrowing but sets the scene for the story that follows. Making it hard not to be curious as to what would happen next. The short chapters are clear and help focus the story so if you aren't a fan of lengthy chapters this would be perfect for you. It's a dark and brutal story at times and also heartbreaking too due to some of the events that the characters go through. The background on certain characters was so interesting and really helped to make the characters more rounded whether it made them more likeable is another thing entirely. There are some pretty evil characters that left me feeling tense and hoping they got what they deserved.

It was very easy to be pulled into this story and once I started reading I had trouble putting it down, I could have easily read in one go. Absolution definitely kept me on my toes mainly because I was never quite sure which way the story would take me next. I guess I went into the story thinking it would go in one direction but the story ended up surprising me and I really enjoyed the twists and turns that followed. I really am trying to be vague about the plot as it really is well worth reading and discovering all the details for yourself.

Dark, gritty and brutal at times but a brilliant story that will keep you entertained right to the very end.

With thanks to Caroline Vincent for the invite to join the tour and my copy. This is my honest and unbiased opinion 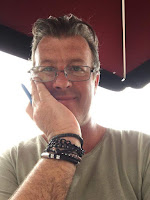 P.A. Davies was born in Manchester, UK, a city he has lived in and around all his life. He loves Manchester and is proud to be part of the multi-cultural, modern city that houses two Premiership football teams and is the birthplace of many a famous band, such as Oasis, the Stone Roses, Take That and Simply Red.

For most of his life, he has dabbled with writing various pieces - from poems to short fictional stories - but this was always just for fun. However, following advice from a good friend he decided to have a go at writing a novel. Thus, his first novel ‘Letterbox’ was conceived, a fictional take on the infamous IRA bombing of Manchester in 1996. It took him over a year to complete but while doing so, he found it to be one of the most satisfying and interesting paths he had ever followed. It came as no surprise that the writing bug subsequently became firmly embedded within him.

To label P.A. Davies’ writings would be difficult because his works range from thrillers to touching novels to true-to-life tales embedded in a captivating story, making P.A. Davies an imaginative and versatile storyteller.