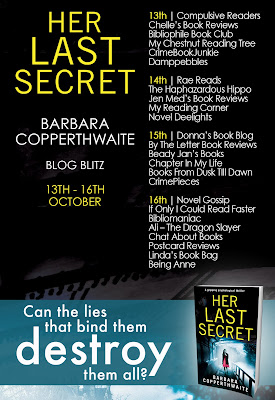 It was such a pleasure to be invited to join the blog tour for Her Last Secret by Barbara Copperthwaite, thank you Noelle.

You can catch my review today for this brilliantly tense story but first of all let's take a look at the description for the book... 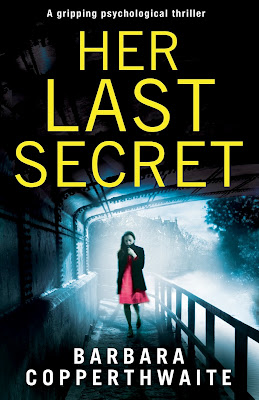 There are some secrets you can never tell.

The last thing to go through Dominique Thomas’s head was the image of her teenage daughter’s face and her heart lifted. Then the shot rang out.

They were the perfect family. Successful businessman Ben Thomas and his wife Dominique live an enviable life, along with their beautiful children; teenager Ruby and quirky younger daughter, Mouse.


But on Christmas Day the police are called to their London home, only to discover a horrific scene; the entire family lying lifeless, victims of an unknown assailant.


But when Ruby’s diary is discovered, revealing her rage at the world around her, police are forced to look closer to home for the key to this tragedy.


Each family member harboured their own dark truths – but has keeping their secrets pushed Ruby to the edge of sanity? Or are there darker forces at work?


This dark, gripping psychological thriller will have you holding your breath until the very last page. Fans of Behind Closed Doors, Sometimes I Lie, and The Girl on the Train will be captivated.

The first thing I have to mention is the opening to this story it left me ever so curious as to what took place in this seemingly normal family home. With a mystery surrounding the events of Christmas Day I couldn't wait to get involved in the story. The way the story unfolds is very clever flicking backwards and forwards from the present to the previous weeks. I found this moved the story along brilliantly. This way the reader gets the background information at a steady pace along with snippets of information after the event. Meaning all the secrets slowly begin to simmer and then bubble to the surface before building up to the thrilling conclusion.

Having multiple perspectives can on occasion be confusing but the way Barbara Copperthwaite wrote this families story was expertly done. It was such a clever way of telling the story from all angles but still keeping a true sense of tension. It was also great to see a family who isn't fully perfect aswell as showing events that can happen to teenagers in real life all too often. Then add in the secrets and lies that can occur within both a relationship and a family, who knows what will happen next. Even though this set of characters are by no means perfect and some of them definitely have some interestingly dark and damaged character flaws. There is also an emotional pull to them which is definitely down to how well the characters were written. There are characters to love but also hate with some of their actions being completely inexcusable.

I can't describe just how easy it was for me to be pulled fully into Her Last Secret there is such an intriguing plot and characters that had their fare share of secrets waiting to be discovered. I also think setting the story at Christmas made it even more compelling as usually at this point of the year most families are coming together unlike the Thomas family. The chapters just flowed seamlessly so much so that I had to finish this book in one evening. It's safe to say that I was glued to my kindle until I finished this book just after 1:30am. Where I then just sat back and thought how impressed I was with all of the fabulous twists and turns contained with this book. I didn't think I would get so caught up in this families life but I did and I have to say that I was almost holding my breath as the final scenes played out. Her Last Secret has a strong message of you never know what goes on behind closed doors the fact that a persons life can appear to be so happy and normal may not always be the case.

Compulsive reading!
5 stars from me!

With thanks to Noelle at Bookouture for the invite to join the blog tour and my copy. This is my honest and unbiased opinon

Barbara is the author of psychological thrillers INVISIBLE and FLOWERS FOR THE DEAD. Both have been Amazon best sellers. She is also the author of THE DARKEST LIES, and her latest book HER LAST SECRET is out on 13 October.

Much of her success is thanks to her twenty-odd years' experience as a national newspaper and magazine journalist. She's interviewed the real victims of crime - and also those who have carried those crimes out. Thanks to people sharing their stories with her, she knows a lot about the emotional impact of violence and wrong-doing. That's why her novels are dark, realistic and tackle not just the crime but its repercussions.

When not writing feverishly, she is often found hiding behind a camera, taking wildlife photographs.
What people say about Barbara's books:

"Will have you looking over your shoulder and under your bed... Original, gripping, with a deep psychological impact," Sunday Mirror