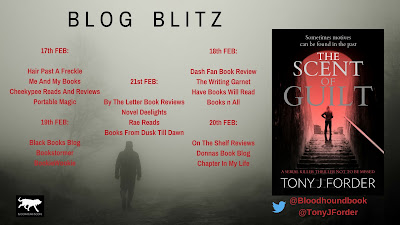 Thank you for stopping by today I'm thrilled to be sharing my review for The Scent of Guilt by Tony J Forder as part of the blog blitz today. First of all though let's take a look at the description for the book... 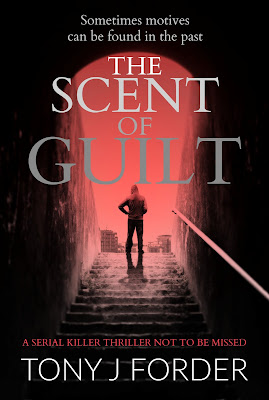 Twelve years after he left Peterborough under a cloud, DI Bliss returns to the city and the major crimes team. Having spent years policing organised crime, Bliss is plunged straight into the heart of a serial murder investigation.

Meanwhile, Penny Chandler has been promoted to DS and has been working in London on the Met’s sexual crimes team. But when two rapes are reported on her old patch in Peterborough, Chandler volunteers to interview the victims.

Chandler joins the hunt for the attacker and soon notices a possible link between the rapes and Bliss’s murder investigation. Could the same man be responsible?

Just as both cases seem to stall, a call comes in from an ex-policeman who knows of unsolved cases in the USA with a similar MO. Bliss finds himself travelling to California to hunt for a killer whose reach may have stretched further than anyone could possibly imagine.

But in order to catch the murderer, Bliss must discover the killer’s motive. A motive which should have remained buried in the past…
Buy Link
https://www.amazon.co.uk/Scent-Guilt-serial-killer-thriller-ebook/dp/B079H2PZLV/ref=sr_1_1?s=digital-text&ie=UTF8&qid=1519200539&sr=1-1&keywords=the+scent+of+guilt

First of all I have to mention that The Scent of Guilt is the second book in a series however I still managed to read this story without confusion. As with all series to get the full character history I guess it could be a good idea to start at the beginning though.


I really enjoyed how the book focuses on the investigation, completely pulling me in but there was also the odd part of the story told from the point of view of the killer. This provided an extra chilling edge to an already dark story! The case is very intriguing and left me wondering what would happen next along with a trip to America that brought up some really interesting questions. The pace of this book for me was pretty great there was always something happening to keep the momentum going.


The characters of Chandler and Bliss are engaging and I enjoyed the interactions between them, they just worked so well together! Both characters develop brilliantly throughout the book and I think Tony J Forder has created some believable and thoughtful characters. Bliss has his flaws but his determination to crack the case makes for a gripping read. Then partner him with Chandler and they really made the story shine.


There are dark themes within the story but it felt as if it was handled sensitively and wasn't overly graphic but dealt more in the feelings of the victims and family members.


There are some thrilling twists in this story along with tense and dark situations that had me gripped throughout. 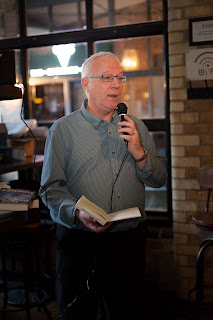 Tony J Forder is the author of the critically acclaimed crime thriller Bad to the Bone, the first in a series featuring DI Jimmy Bliss and DC Penny Chandler. The sequel, The Scent of Guilt, is available from 17 February 2018. A third book in the series is currently in progress.

Tony’s dark, psychological crime thriller, Degrees of Darkness, featuring ex-detective Frank Rogers, was also published by Bloodhound Books. This was intended to be a stand-alone novel, but Tony is now considering the possibility of a follow-up.

One book that will definitely see a sequel is Scream Blue Murder. This was published in November 2017, and received praise from many, including fellow authors Mason Cross and Matt Hilton.

Some years ago, Tony won a short story competition judged by an editor from Pan Books. The story, Gino’s Bar and Grille, went on to be published in Dark Voices 2, part of the celebrated Pan Book of Horror series. Three further short story sales followed: Book End, published in Dark Voices 4, Character Role, in FEAR magazine, and finally A Grim Story, which featured in A Rattler’s Tale. It was the start of Tony’s publishing journey.