Thank you for stopping by I'm delighted to be sharing an extract today from Tess and Tattoos by H.A. Leuschel as part of the blog blitz. I also left a mini review for this book when I reviewed Manipulated Lives back in September so I will be sharing that too. Don't forget to check out the giveaway to win a copy of Manipulated Lives! 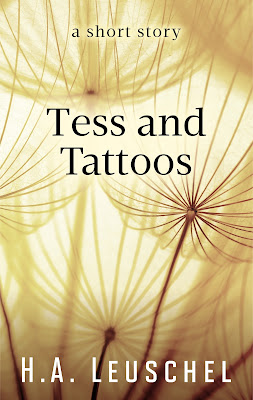 A suspenseful and emotional novella exploring whether we can ever be free from our past mistakes.

In this story, the reader is taken on a compelling journey into the human mind where genuine friendship offers the key to inner peace.

Meet Tess, an elderly lady living in a care home apartment in the outskirts of Edinburgh, whose past is haunted by a wrong decision. She meets Nurse Sandra, a warm and bubbly single mother of three, who is instantly intrigued by Tess’s personality and the mystery that surrounds her.

Hello and thank you very much for inviting me to Rae Reads!
I’m so pleased to be able to share an extract with you today from my short story ‘Tess and Tattoos’.
If you look at the cover, you may notice the outlines of dandelion seeds flying in the air which I chose because of their symbolic meaning for positivity and survival. In ´Tess and Tattoos´ two women’s lives intertwine, and they form a friendship that allows one of them to find closure and peace, and the other to find purpose and in her new job. It’s warmth and genuine compassion for each other that ultimately manage to fill the void that painful events had left behind.
Excerpt
She lifted her chin at the thoughts, pushed them aside, took a deep breath and, with renewed determination, attempted to start the car. By some miracle it decided to respond to her pleas at last and the agitations and ensuing discussions of her children resumed. There were no further challenges thrown at her, though. She dropped the children outside the school gates and, with butterflies fluttering in her tummy, drove into the indicated staff car park at the nearby care home. She took another deep breath, checked her reflection in the mirror and, despite the aching tiredness of yet another fitful sleep-depraved night, summoned up all her energy to help make this first day a success. She was a person who readily said ‘darling’, ‘dear’, ‘honey’, and ‘sweetheart’, and no one was going to stop her from applying the vocabulary to the weathered faces and aching bodies in the building, who were expecting her. She wondered what their lives had been like so far and why now, of all times, they did not have family close enough or loving enough to include them in their midst. Then again, she wondered if she’d be able to bear being a burden to her own children and stand in their way of living out agendas they had chosen for themselves. She did not know, and after a few glances to the surrounding gardens with its well-kept lawns that were dotted with generous amounts of flowers and bushes, and even a small pond with ducks gliding over the surface, she concluded that there could be worse places to live. She’d have to wait and see though, before she could allow herself to judge.
Her feet crunched on the gravel as she walked towards the front door, energetically, and with purpose.  She was ready. ‘Here we go,’ she muttered under her breath, giving herself a mental thumbs-up. By the time she sat down in Tess’s sofa chair, she was genuinely pleased to get off her feet for a few minutes. Sipping a hot cup of black tea and dipping a delicious biscuit into the brew was the boost she needed in order to get through the rest of her first work day.
She’d been so nervous for weeks, her sleep broken and erratic, and anxious about whether the children could cope with their new routine. She’d procrastinated for months before deciding to pick up her former job. When she’d received the acceptance letter from the home, she had danced around the living room with such excitement that the children had thought she’d been invited to the Queen’s tea party. Meeting the mysterious Tess, seeing her colourful paintings, and watching the elderly lady’s happiness for sharing a cup of tea with her, had confirmed her intuition that going back to caring for the elderly had been the right decision. People dissolved so quietly out of life, and she was determined to make those lives as meaningful as she could.

In Tess and Tattoos you get to see a friendship blossom and also hear from Tess about her past. This story has a lovely depth that makes you invested in the characters with Tess having regrets regarding her past. When we first meet Tess I was definitely intrigued as to which way the story would go wondering what had actually happened to Tess. There is an emotional edge to this story especially the more we get to know about Tess. 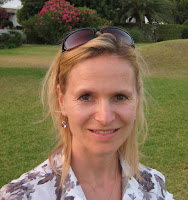 Helene Andrea Leuschel grew up in Belgium where she gained a Licentiate in Journalism & Communication, which led to a career in radio and television in Brussels, London and Edinburgh. She now lives with her husband and two children in Portugal and recently acquired a Master of Philosophy with the OU, deepening her passion for the study of the mind. When she is not writing, Helene works as a freelance journalist and teaches Yoga.


Why not follow along with the blog blitz, see below... 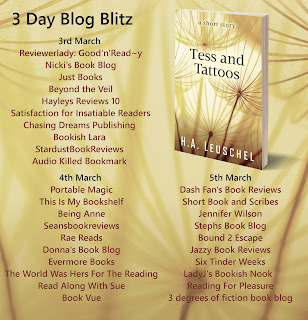