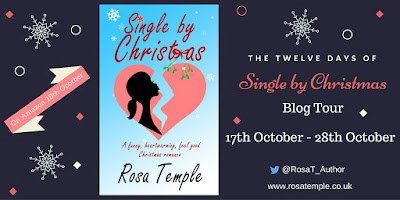 Thank you for taking the time to join me for my second stop on the Blog Tour for Single by Christmas by Rosa Temple. First of all let's take a look at the book and then you can read an excerpt and then finally enter the lovely giveaway! 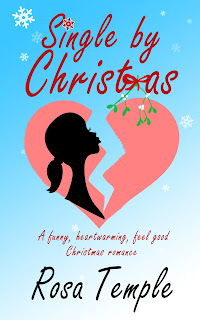 Alex and Charlie are together for 11 blissful months until Alex goes out of town and does something she will later regret. Was she drunk? You bet. Does she want Charlie to know? Well what do you think?

With the couple about to spend their first Christmas together will Charlie be the forgiving kind or will Alex be Single by Christmas?

You might be wondering what I was doing, sitting in a graveyard at five minutes to midnight on Christmas Eve. And if you guessed gravedigger or graverobber, you’d be wrong. But ask yourself, who sits in a graveyard when it’s cold and out and out spooky unless it’s absolutely critical? The church, where I attend Midnight Mass with my family every year, is just across the way. But sitting on that particular bench just inside the graveyard was absolutely critical.

You see, in the lead up to Christmas I managed to lose something. Well, not something, someone. Charlie; my reason for living, my heart, my soulmate …  you get the idea. And before you start crying, don’t worry, he wasn’t buried there. At the time, I wasn’t exactly sure where Charlie was, but he knew I was there. Waiting.

By the stroke of midnight I would have known for sure if I’d truly lost him. I’d asked him to join me and my family for the service. They’d arrived earlier. I smiled and greeted them all – Mum, Dad, big sister, Elise, and her husband and my younger sister, Jo-Jo. They asked where Charlie was and I managed to hide my worst fears and say he’d be along soon, that he was held up. So they just kissed me and piled inside with the rest of the congregation.

My family had been looking forward to seeing Charlie, even more so than they were me. You see, like everyone who meets Charlie, they’d fallen in love with him. Who could blame them? He’s charming, he’s intelligent, he’s sweet, kind, generous. The list could go on. I admit those things weren’t what first attracted me to Charlie. No, the attraction was pure lust and desire. He walked into that New Year’s Eve party the year before and I was stunned into silence. And I’m never silent. Tall, well dressed, mesmerising looks and those dimples that appear every time he smiles, which he does a lot by the way.

And I love Charlie’s family, too. His mum, Leeza, his dad, Don, who Charlie gets his looks and  sense of humour from, and his brother. I wasn’t sure Leeza approved of Charlie having a white girlfriend, at first, but I realised that was just paranoia on my part. His family are not like that. His mum, who I grew to admire and love, was just being protective, the way some mothers are.

But, I digress. My family had no idea that I’d seen Charlie twenty-four hours prior to the service and that we’d had a heated argument and that Charlie had practically slammed a door in my face. Minutes before that I’d made a complete and utter fool of myself in front of his wonderful family and he’d walked away with such disgust and disappointment in his face my heart broke in two. He’d closed the door on me but I hadn’t stopped sending begging texts and hysterical voicemails just so he would show up on Christmas Eve – like he’d promised me. I wasn’t expecting a miracle, just praying for one. Because it would have taken a miracle for Charlie to walk towards the church, bypass the tall wooden doors, see me on the bench, push open the graveyard gates and tell me he’d forgiven me.

With everyone nice and warm inside the church, I continued to sit watching puffs of vapour appearing in front of my face from every exhale, brimming with an apology that may never be heard.

You might be saying, “If Charlie’s that wonderful, why couldn’t he just come to the church, it’s Christmas after all?” You have to know, he’d never be that unforgiving without very good reason.

Honestly? It took a whole year of knowing Charlie to finally understand what it is to love someone completely and to be loved the very same way in return and just one month to lose it all. 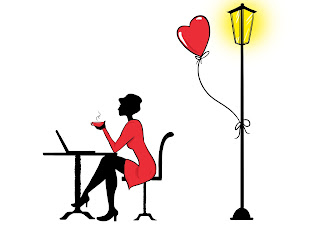 Rosa Temple is a writer of romantic comedies, chick-lit and contemporary romance. To date she has published one novella, Sleeping with Your Best Friend, and her first full length novel, Natalie’s Getting Married, was published on 14th March 2016.

She has tried her hand at various occupations, from tea lady (albeit for one morning only after being returned to the agency because half an office block suffered caffeine deprivation) to supervising the office running the London Bar Exams.

Rosa is a Londoner born and bred and still resides in West London with ambitions to escape to the country when a suitable country pile becomes available.

In 2014 she was awarded a Distinction in her Creative Writing MA from Brunel University.
Rosa admits to being a reluctant keep fit addict. She owns a yoga mat, a pair of trainers and a spin cycle that gathers dust in the corner of her writing room. She vows that she will run the London Marathon again but has been saying this since her first and only marathon, run in 2010. Hence the trainers.

Having been a ghostwriter for several years, Rosa has written several magazine articles and has penned a multitude of one off novellas and novella length series in the romance genre and in its various sub-genres to include: contemporary romance, historical, adult only, romantic comedies and sweet romances.

Rosa is a member of a writing critique group who meet monthly. This lively and hard working group keep her on her toes as she hones her writing, listening and editing skills.
Rosa’s husband and eldest son are both musicians, her second son swims at a National level for his London team.

Before devoting the majority of her time to her writing of romantic comedies and chick-lit, Rosa was a singer (that’s how she met her husband) and still continues to perform and write songs.

Early reviews show that Natalie’s Getting Married is a favourite of many readers and book bloggers and she follows it with Christmas romantic comedy novel, Single by Christmas, with plans to publish a book series in the very near future.

Rosa loves to chat (about anything really) so follow her on Twitter @RosaT_Author or visit her blog, Rosa Temple Writes, on rosatemplewrites.blogspot.co.uk

Why not follow along with the rest of the Blog Tour. 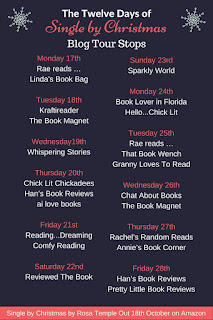