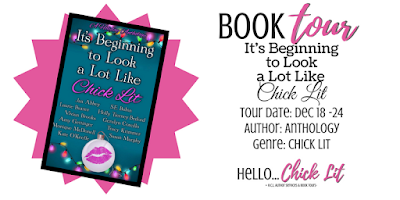 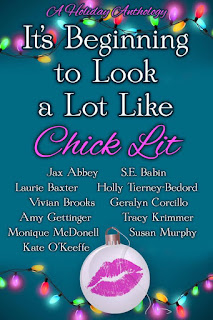 Ming was trying to calculate their good-byes. Should she say it had been nice seeing him? Probably. Common courtesy, at least, was called for. What if he tried to do that kissing on the cheek thing that guys do? What if she got flustered and turned, brushed her lips against his? What if—and then, entirely against her will, her mind filled with images of them kissing up against the brick building, her back to the wall, arms wrapped around Charlie’s neck, Charlie and his ridiculous scarf and his ridiculous jacket wrapped around her, keeping her warm even without a coat, right there between the spot-lit posters for The Shop Around the Corner and Some Like It Hot.

“You have a good night, now,” Marcy said as she held the door for them, snapping Ming back to reality.

Ming smiled and said a shaky “Merry Christmas” as she followed Charlie through the exit into the night.

And then she stopped.

“Wow,” he breathed next to her.

Endless enormous snowflakes floated down, a good three inches already piled up on the ground, even though it had been bare when she’d gone into the theater. It was dark, quiet, the lot almost empty at this hour on the holiday. Everyone else was home or watching Aftershock 5: Megatsunami or whatever the hell was playing over at the multiplex. There was a click behind them. Marcy walked around to her car, parked beside the building. She climbed in and pulled slowly away, wipers swishing. A breeze swirled, spinning the flakes through the air around them.

“I do miss this,” she said, stepping out from under the overhang in front of the theater and turning her face to the sky.

Oh, crap. Why had she said anything? She was practically asking him to bring it up.

“I’m in California now,” he added.

And there it was.

“Yeah. I’m, uh…” In California, too, and actively avoiding you.

“Yeah, it’s okay. Congrats on the getting into the doctoral program, by the way.”

She gave him a quizzical look.

He looked down, shuffled some snow with his foot. “I might have cyber-stalked you a little. I mean, I don’t think it really counts as stalking. I found your Twitter profile. And sometimes I see you comment on Facebook. We have like eighteen mutual friends.”

Nineteen, actually. Not, again, that she was keeping track on purpose. Just. You know, you notice these things.

“Yeah, well so is—” Crap she wasn’t supposed to know he was at Caltech.

He gave her a lopsided grin. “You knew.”

“You could’ve looked me up.”

“Would you have wanted that?”

She said nothing. She wrapped her arms around herself. Suddenly, she was cold.

“I can walk myself to my car, Charlie. I’m a grown woman.” In the interest of being able to say she’d at least been polite, she thrust out her hand. “It was nice seeing you.”

He shook it. She gave him a curt nod, then turned and walked toward the lot on the other side of the building. Unfortunately, Charlie Brown followed. Good grief.

He nodded behind her. There was one other car in the lot. His mom’s old Corolla, parked at the opposite end.

“So I guess… I guess good-bye, then,” he said, almost sadly. Which was rich, coming from the guy who had rejected her. No, Charlie, we’re not going to be pals back in SoCal. So sorry. Seriously, she wanted to ask him what his deal was. But not as much as she wanted to get into her car and turn the heat on. She hadn’t dressed for lingering out in the cold.

The imagined scene between the movie posters came back unbidden.

“Yeah, bye,” she snapped, squelching it.

She stalked to her dad’s Accord, which she had borrowed for the occasion, pulling her sweater sleeves down over her hands for warmth.

She never could figure out what had possessed Charlie to handle the whole prom thing the way he had. If anything, she had been extra nice to him in school. She had, for instance, never once mentioned the time freshman year when he had asked her to a dance only because his parents made him ask someone. They were concerned he wasn’t being “social” enough. So he’d gone and asked the biggest nerd he could find with an XX genotype. And she’d never even brought it up. Fortunately, she had turned him down with some excuse about visiting cousins that weekend (really, what did he expect, coming up to a girl he’d never spoken to outside of class and asking her on a date?), but she’d felt bad when she learned his folks put him up to it (Brian tipped her off). And, actually, in a weird way, it was what made her notice him. What made him stand out from the rest of their dorky peers as someone bordering on relatable.

After that, she sat with him at lunch sometimes, called him if she missed class to get the assignment, passed him the occasional caricature she’d doodled of their teacher in Advanced Bio because she knew it’d make him laugh. It had been the start of what became a real friendship. What she had thought was a real friendship.

Her car was so covered, if there had been others there, she would have had trouble picking hers out. Fortunately, the snow was wet and lightly packed, so it only took a quick sweep of the brush to clear the windows. She willed herself not to look back at Charlie as she worked, though she heard his engine start up and saw the glow of his headlights lighting up in the corner of her eye.

She took a deep breath and let it out. She knew she was fooling herself if she thought it hadn’t affected her to run into him. But there would be lots of time to process her resurfacing adolescent angst and whatever else bobbed up with it. Right now, she just wanted to get the hell out of there.

She dropped into the seat, slipped the belt into the buckle, slid the key into the ignition, and turned it. All one smooth motion. Only one problem. The car didn’t start.

S.E. Babin is an award-winning author with a passion for writing books with a paranormal twist. Whether it’s romance or mystery, she loves taking the norm and turning it into the extraordinary. Her love of reading turned into a curious exploration to see whether or not she could write her own novel. Beginning with discarded pages of angsty novels and a slightly popular reimagining of Beowulf’s Grendel in her high school English class, Sheryl spent way too much time in the library, killing any chance of her becoming a cheerleader or anything even remotely cool.

First and foremost, Geralyn Corcillo loves reader reviews! In other news…When she was a kid growing up in Scranton, Pennsylvania, Geralyn Vivian Ruane Corcillo dreamed of one day becoming the superhero Dyna Girl. So, she did her best and grew up to constantly pick up litter and rescue animals. At home, she loves watching old movies, British mysteries, and the NY Giants. Corcillo lives in a drafty old house in Hollywood with her husband Ron, a guy who’s even cooler than Kip Dynamite.
Facebook | Twitter | Amazon | Website

Amy Gettinger lives in Orange County, California with her husband and her two piteous poodles under the shade of a very noisy old eucalyptus windrow full of crows and wild parrots. When she’s not writing novels, she’s creating Reader’s Theater plays and coaching a local senior group to perform them, complete with big bad wolves, feather boas and tiaras.
Facebook | Twitter | Amazon | Website

A Durham, North Carolina native and graduate of the University of North Carolina at Chapel Hill, Jax Abbey bleeds Carolina blue. By day she molds the young, bright minds of the future, but at night you can find her furiously pounding the keyboard as she funnels the zany ideas and quirky characters from her brain to the computer. When Jax isn’t telling preschoolers to keep their hands to themselves or telling her characters to simmer down, she loves to spend time with her significant other, Tyler, and her TinyDog.
Facebook | Twitter | Amazon | Website

Tracy’s love of writing began at nine years old. She wrote stories about aliens at school, machines that did homework for you, and penguins. Now she pens books and short stories about romance. She loves to read a great book, whether it be romance or science fiction, or any genre in between, or pop popcorn and catch up on her favorite TV shows or movies. She’s been known to crush a candy or two as well. Her first romance novel, Pieces of it All, released in May 2014 followed in December with Caching In, a romance mixed with the hobby of geocaching. She also has written several short stories.
Facebook | Twitter | Amazon | Website

Kate O’Keefe – I write funny, sexy, feel-good romantic comedies.
I’ve loved rom coms, romance, and chick lit since I first encountered Bridget Jones as a young, impressionable writer. It really was a match made in chick lit heaven.
I’ve been a teacher and a sales executive, but am now content as a mother and writer, madly scribbling all the ideas I’ve accumulated during my time on this planet we call home.
I live and love in beautiful New Zealand–where my novels are all set–with my wonderful family and my two very scruffy, naughty dogs.
Facebook | Twitter | Amazon | Website

Monique McDonell – I am an Australian author who writes fun, flirty contemporary women’s fiction including chick lit and romance. After many attempts writing books that made me miserable I decided to write books with happy endings and have been loving the journey ever since.
I live on Sydney’s Northern Beaches with my husband and daughter which probably explains why the beach features in so many of my novels and why people describe them as excellent beach reads.
Facebook | Twitter | Amazon | Website

Laurie Baxter has degrees in both puppetry and screenwriting because let’s face it, majoring in English would have been no more useful and way less fun. She loves chocolate, ice cream, chocolate ice cream, dogs, New York City, old movies, modern architecture, all kinds of theater, and music from before she was born. Her eighth grade English teacher told her to become a writer, so she did.
Facebook | Twitter | Amazon | Website

Why not
visit all the Stops on the Tour: