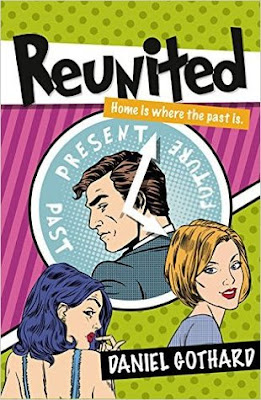 In 1992, Ben Tallis is coming to terms with the recent death of his father. His ability to cope isn’t helped by the fact he’s secretly in love with one his best friends. At least keeping a daily journal helps him make sense of events, and he believes it’s the perfect preparation for his plan to one become a successful journalist.

In 2012, Ben has achieved his career ambition—he’s a highly respected journalist and is engaged to a hardworking and ambitious lawyer. But this seemingly "perfect" relationship is fraught with problems. Ben mentions in passing to his editor he has received an invitation to a 20 year school reunion but doesn't want to go. His editor, however, smells a great feature article and insists Ben returns home, faces his past—including his secret teenage yearning—and writes a feature on how much we change and yet in so many ways stay the same. As Ben reluctantly re-engages with his past, he soon comes to realize that we can never run from the truth—or who we truly are.

I loved the feeling of nostalgia that ran throughout the story. It definitely got me thinking about how my own experience of school was. There were plenty of questions that popped up within the story for me. First of all would I be happy to go to my school reunion. Well I guess in some ways yes and other ways I would be hesitant just like Ben is in Reunited. The story brought back plenty of memories of my experiences of crushes, school and old friends.

For the most part this story is light hearted but has issues such as loss, bullying and facing the past. Daniel Gothard has managed to capture both the teenage Ben and the older Ben perfectly. The soundtrack and songs that feature in the book really do compliment the story. Music definitely evokes memories and this works brilliantly in the flashbacks.

I have to admit I really enjoyed the flashbacks with the two time periods flowing easily together. Reunited kept my interest and I was well and truly drawn into Ben's world both in 1992 and 2012. Ben really does grow as a character as he looks back to the past to move forward in the future.

Reunited is a fairly short story that I read in no time. Once I picked the book up I found it hard to put down.

Thank you to Daniel Gothard & Urbane Publications for my copy. This is my honest and unbiased opinion.