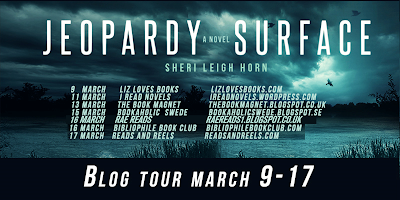 Thank you for joining me today on the Blog Tour for Jeopardy Surface by Sheri Leigh Horn. I will be sharing my review of this fab crime story but first of all let's take a look at the description for the book. 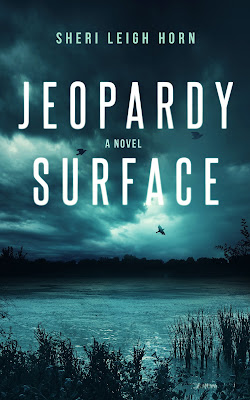 JEOPARDY SURFACE marks the debut of a compelling new crime series featuring a one-of-kind protagonist and cutting-edge investigative techniques that will have you turning pages late into the night.

It’s the witching hour and Special Agent Regan Ross is having a WTF kind of night. Morning? How the hell did she get from her bed to her front yard? And why is she holding a loaded firearm? Sleepwalking doesn’t bode well for the rising star in the FBI’s Behavioral Analysis Unit, but whatever is causing her recent weight loss and bizarre nocturnal activities will have to wait. The phone is ringing. It’s probably her sister Erin, the surgeon who knows best, demanding to know her plans for the holidays. Why would this year be any different? They’ll spend the somber anniversary and Christmas like always—drinking too much, watching Turner Classic Movies, and not talking about their dead parents. Caller ID provides yet another surprise.

Hearing Special Agent Robert Haskins’ voice for the first time in six months has Regan reeling. The mention of Maryland’s Eastern Shore conjures images of Jennifer Abbott, the student-athlete whose disappearance from a small campus is national news. There are complications. For starters, her areas of expertise—geographic profiling and predictive analysis—require a lot of information from a series of crimes. Single murders typically aren’t her purview and involving herself in an investigation to which she has not been officially assigned will send the BAU chief’s blood pressure through the roof.  She should say no, but she won’t. There’s too much residual guilt where Rob Haskins is concerned.

Regan Ross knows bad, and this one is BAD. The killer has left the mutilated body and a cache of troubling clues at a remote farm and posted the coordinates of the cache on a popular geocaching website. Is he taunting investigators?  Expediting the discovery of his work? Both? The calculated modus operandi and uniquely sadistic signatures are not the work of a novice, and Regan is sure of one thing: he will kill again.

When visiting forensic psychologist Dr. Sheridan Rourke presents a lecture at Quantico featuring closed cases from Northern Ireland, Regan makes a shocking connection between an older series of murders and the Maryland case. Despite the Police Service of Northern Ireland’s insistence to the contrary, Regan and Rourke are convinced the killer of five women in Belfast two years ago is hunting women on the Chesapeake Bay. As the two become unlikely partners, Regan learns the psychologist’s past may be as haunted as her own.

When I was invited to review Jeopardy Surface I was definitely intrigued, the story sounded entertaining with a great plot so I knew I had to read it.

It was great to get an insight into the main character right from the first chapter. I loved getting to know Regan and her character was developed brilliantly. She is strong, determined and overall a truly likeable character. Although I have to say all of the characters had interesting personalities that made the story even more engaging. It was also lovely getting to know Regan's family and I actually enjoyed their story as much as the investigation into the murders.

The story gets going pretty quick too with Regan being assigned to the case straight away. I really enjoyed the geographic profiling aspect to the story it was interesting to see how Regan went about her work. Everything was perfectly detailed with a great storyline that held my interest throughout.

Jeopardy Surface is the type of book where you become immersed in both the story and characters lives. The story moves at a quick pace and strikes a pretty good balance of showing the characters lives and showing the reader the terrible crimes committed. There are details given regarding the murders but it isn't overly gory or gratuitous. I couldn't wait to find out how everything would end, the question is will Regan and her colleagues catch the killer?

This is such a great start to what looks to be an impressive new series and it will be a pleasure to read the next book.

An interesting & engaging story along with a brilliant character makes Jeopardy Surface a thrilling read!

Thank you to Sheri Leigh Horn for my copy. This is my honest and unbiased opinion.
at March 16, 2017