Thank you for joining me on the blog tour for A Little of Chantelle Rose by Cristina Hodgson. This is my first of two stops on the tour and I will be sharing an excerpt today. Then if you get chance come back on the 10th June for my review.
First of all let's take a look at the book... 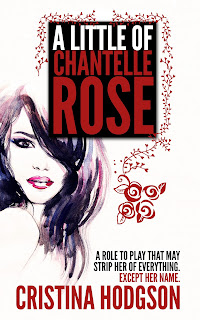 A little of Chantelle Rose

At the age of twenty-four, Chantelle Rose has all a city girl can expect: a tiny bed-sit in South London, a lousy poorly-paid job, a tyrannical boss, and quite a few exes added to an ever-growing list.

Desperate for change, she becomes an extra in a seedy crime film. When that leads to the opportunity of a lifetime – a role to play with a million dollars to win and seemingly nothing to lose – she accepts without thinking twice. After all, what could possibly go wrong? In any event, she´ll earn enough to buy her dream home, set up her own business and never worry about money again.

But who can she trust? Who is bent on scaring her away, and why?

There seems to be more at stake than just her heart. Will a million dollars be worth it?

My elation over the cottage vanished in a flash as I read and re-read the note. It was just seven words long, but each made me shiver. Cut-out newspaper letters had been strung together to form the message:

HOLLYWOOD BITCH, YOU ARE NOT WANTED HERE.

My legs wobbled slightly as I glanced around me, wondering if the sender was watching me from the dense woods. Despite my thumping heart, I had to pretend I was calm. Despite tears of fright welling up inside, I had to pretend that I wasn't on the verge of breaking down and crying. Pulling myself together, I opened the car door, which I'd left unlocked, and before I got in I held my right arm high and stuck-up my middle finger, swinging it around in a clear gesture of FUCK YOU. I hoped that if the crazed stalker was still lurking around, he or she would get a clear view of my cool, unimpressed and bravo attitude.

Boy, was I scared. I whammed the door of my Mini shut so forcefully that the whole vehicle vibrated. I punched down the lock on the door and mumbled over and over as I fumbled for the car keys.
“Please, please, please God, let the car start first time...
Then it dawned on me, with a wave of pure and utter dread, that I'd left the car keys on the windowsill in the master bedroom on the first floor as I'd tried, unsuccessfully, to open the window.
I peered through the car window at the surrounding woods. I really didn't fancy going back into the house, or even getting out of the car. I'd a good chance of getting attacked by the lunatic who'd followed me out here.

Where was my showy spunk now? So much for sticking my finger up in the air in a bravado pretence that I didn't care.

I took several deep breaths and braced myself. This is when I see what I'm made of! With that I swung the car door open and pelted up the driveway towards the house, practically hurdled the gate and took the doorsteps in one flying leap. My hands shook uncontrollably as I let myself into what I now began to think of as a dark and sinister house. I shot across the living room like a bullet and took the stairs two at a time. I swerved into the master bedroom and drew a deep sigh of relief on seeing my car keys glinting in the sunlight. I pounced on them and as I was about to turn to leave I heard a distinct noise from down below. At least I thought I did, but my heart was pounding so hard that I could hardly hear anything except the thump-thump, thump-thump as blood pulsed through my veins.

Then I heard a voice.

"Chantelle? Where are you?" 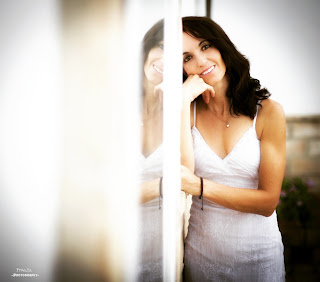 Cristina Hodgson, mother of two, born in Wimbledon, London, currently lives in southern Spain. Cristina had a long career in sport, reaching national and international level and still actively participates in Triathlon races and enjoys outdoor activities. In her spare time she also enjoys reading and writing. She won a sports scholarship to Boston College. After a period in Boston, she returned to the UK and graduated from Loughborough University with a degree in Sports Science.
A LITTLE OF CHANTELLE ROSE is her debut novel and will be released in May 2017. Amazingly, it has nothing to do with running!

WHERE TO FIND CRISTINA HODGSON ONLINE:

A Little of Chantelle Rose bookmarks and keyrings 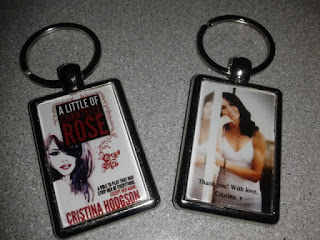 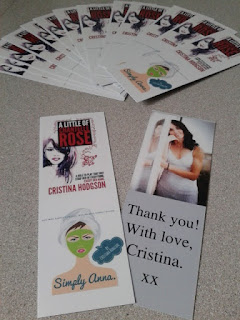