Secrets of the Dead by Carol Wyer @carolewyer #CoverReveal @bookouture

I am delighted to be sharing the cover reveal for Secrets of the Dead by Carol Wyer. This is the second book in the DI Robyn Carter series. I've been lucky enough to get a copy and I can't wait to start reading it!

So let's take a look at this brilliant cover... 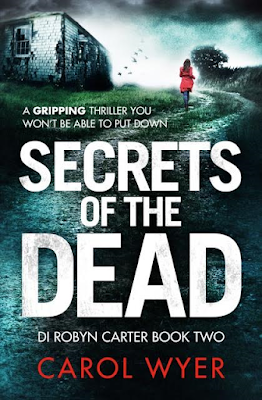 I love the chilling and sinister edge that the cover has, now that we have seen the cover here is the description for the book...

SECRETS OF THE DEAD by Carol Wyer

Three murders. Three innocent victims. What secrets did they share with their killer?

A bottle of bubble bath and colourful, plastic boats were scattered in small puddles on the floor. In the bathtub lay Linda Upton, fully-clothed, her lips a shade of blue, and her bloodshot eyes wide open.

When a young mother is found drowned in the bath, clutching a receipt saying ‘all debts paid’, Detective Robyn Carter knows it’s just the beginning of a harrowing case. She recognises the signs of a serial killer, and when a second victim with a receipt is found, her worst fears are confirmed.

With the local press whipping the public into a frenzy, Robyn is under pressure to solve the crime yesterday. But her team can’t find a link between the two bodies, and the cracks are starting to show.

Just when her leads have dried up, Robyn discovers an unsettling clue she thinks could unlock the case. But as she chases across the plush carpets and manicured lawns of the wealthy elite, honing in on the killer’s shocking motive, one of her own is put in terrible danger.

The press call him The Leopard for his stealth, speed and brutality. Can Robyn stop the most twisted killer of her career before it’s too late?

A heart-pounding, toe-curling, one-sitting serial killer thriller that will hook you from the first page till the last.