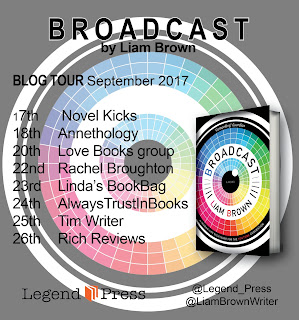 Thank you for joining me today, I'm delighted to be one of the stops on the blog tour for Broadcast by Liam Brown and sharing my review. First of all let's take a look at the description for the book... 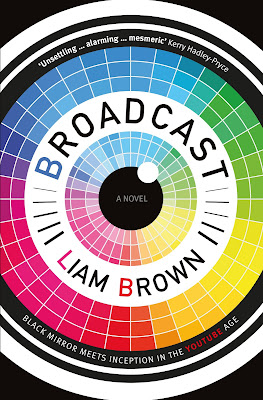 The idea behind MindCast is simple. We insert a small chip into your skull and then every thought, every feeling, every memory is streamed live, twenty-four hours a day. Trust me - within a few months you'll be the most talked about person on the planet.
When David Callow is offered the lead role in a revolutionary new online show, he snatches at the opportunity.
Rapidly becoming a viral sensation, David is propelled to stratospheric levels of celebrity. However, he soon realises the downside of sharing every secret with the world.
A prisoner to both his fame and his own thoughts, David seeks to have the chip removed, only to discover the chilling secret lurking at the heart of MindCast, and the terrifying ambition the show's creator has for him.

With all reality shows that are available to watch it's surely at the back of most minds as to how far will the next one go to get those all important ratings. So it's safe to say I was definitely intrigued by the premise for Broadcast. In this day and age there is an urge to share our lives with the public. With plenty of means available like vlogs and as I said before why not even enter a reality TV show. Broadcast instantly drew me in as we are introduced to the abilities of Mindcast such a simple but genius idea. As with any fame you are surely going to get to experience the darker side eventually. It's a scary thought that people would be able to experience your every emotion and thoughts. I think I was instantly on alert almost wanting to shout a warning out to David. So with this in mind I was very eager to see where this story would go. It was interesting to see David experience this new way of becoming a viral success. He isn't the most likeable character but this just enhances the story as his character develops and becomes a more rounded character as things progress.

The story pulled me along at a fast pace and I pretty much read Broadcast in one go. It was easy to immerse myself in the story and I couldn't wait to see how everything would turn out. Even though there is the Sci-Fi element it is an all too worrying thought that maybe one day this would be possible and who knows what the next big thing will be.

With thanks to Imogen at Legend Press for my copy. This is my honest and unbiased opinion. 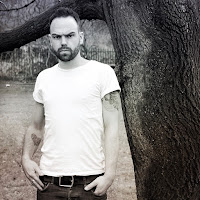 Author of REAL MONSTERS (2015), WILD LIFE (2016) and BROADCAST (2017)
Liam Brown is a writer, filmmaker and former-life model. His debut novel Real Monsters was published in 2015 and long-listed for the Guardian’s Not the Booker prize. He lives in Birmingham with his wife and two children.
Author Links
@LiamBrownWriter
Website