With thanks to the publisher for my copy. 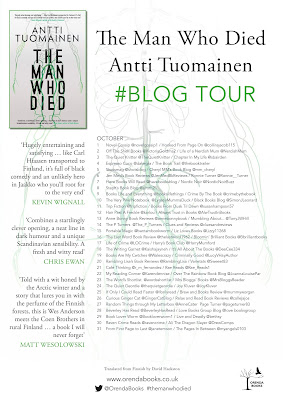 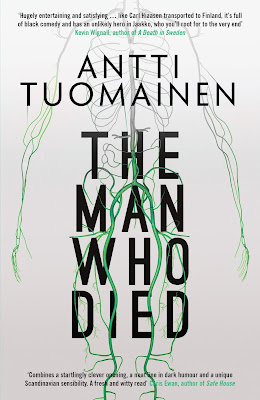 A successful entrepreneur in the mushroom industry, Jaakko Kaunismaa is a man in his prime. At just 37 years of age, he is shocked when his doctor tells him that he’s dying. What is more, the cause is discovered to be prolonged exposure to toxins; in other words, someone has slowly but surely been poisoning him. Determined to find out who wants him dead, Jaakko embarks on a suspenseful rollercoaster journey full of unusual characters, bizarre situations and unexpected twists.

At times this story is pretty surreal but it just works so well and I loved how everything unfolded. Jaakko was someone that drew me right in, from finding out he is dying to deciding to discover the truth behind his poisoning along with who is behind it. I couldn't help but like him he really is a one of a kind character that was so interesting to get to know.

The story moves pretty quickly and held my interest throughout mainly because I felt just as invested in discovering the truth as Jaakko. The Man Who Died is cleverly written and at times darkly funny which I really appreciated. This definitely helped to turn this story into something quite special. There are some surprises along the way that kept me on my toes and I loved to hear Jaakko's inner thoughts as he goes on this very strange journey of discovery. There is also that added bit tension within the story as there is definite a lack of time on Jaakko's side.

The question is will he discover the truth in time?

Dark humour really helps to set this story apart from other thrillers, Antti Tuomainen has created a very engaging lead character in Jaakko. He has a certain matter of fact way of going about his daily life that just kept me turning the pages. There are possible suspects everywhere and I have to admit to suspecting everyone. I will never make a great detective so I just sat back and let myself be carried away on this madcap journey with Jaakko. I was treated to plenty of drama and laughs along the way. With plenty of intriguing twists and turns I highly recommend picking up a copy of The Man Who Died.

With thanks to Anne Cater & Orenda Books for my copy and the invite to join the tour. This is my honest and unbiased opinion.

Finnish Antti Tuomainen (b. 1971) was an award-winning copywriter when he made his literary debut in 2007 as a suspense author. The critically acclaimed My Brother’s Keeper was published two years later. In 2011 Tuomainen’s third novel, The Healer, was awarded the Clue Award for ‘Best Finnish Crime Novel of 2011’ and was shortlisted for the Glass Key Award. The Finnish press labelled The Healer – the story of a writer desperately searching for his missing wife in a post-apocalyptic Helsinki – ‘unputdownable’. Two years later in 2013 they crowned Tuomainen ‘The King of Helsinki Noir’ when Dark as My Heart was published. The Mine, published in 2016, was an international bestseller. All of his books have been optioned for TV/film. With his piercing and evocative style, Tuomainen is one of the first to challenge the Scandinavian crime genre formula, and The Man Who Died sees him at his literary best.
at October 21, 2017