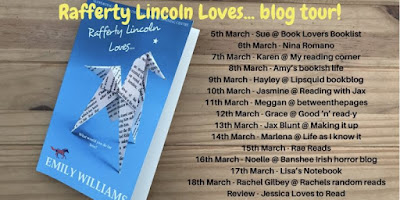 I'm delighted to be sharing my review for Rafferty Lincoln Loves... by Emily Williams as part of the blog tour today. After reading and loving Letters to Eloise I couldn't wait to read Emily's next book. What is lovely about this story is that the proceeds are being donated to The British Thoroughbred Retraining Centre.

Let's take a look at the description for the book... 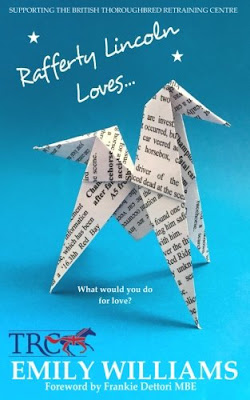 Rafferty Lincoln doesn't like horses. Not one bit. But when the popular high school girl of his dreams, Liberty Ashburn, pulls him into a world of lead ropes and horse brushes, who is he to say no?

Except this isn't any old horse. This is the missing racehorse, Profit's Red Ridge. The horse Rafferty and three of his friends are hiding from the world. And Liberty Ashburn isn’t just any ordinary high school girl. How far will Rafferty go to win her over?

An intense, witty and powerful coming of age story with startling consequences.

The proceeds from the novel ‘Rafferty Lincoln Loves…’ will be donated to The British Thoroughbred Retraining Centre.

BTRC is dedicated to improving and promoting the welfare of retired race horses through education, retraining and suitable rehoming in order to ensure that our Thoroughbreds have a rewarding and valuable life after their racing careers have ended.

Each year thousands of horses leave racing, some because they reach the natural end of their career and others through injury or lack of ability. Established in 1991, The British Thoroughbred Retraining Centre was the ’s first charity dedicated to ex-racehorse welfare, retraining, rehoming and protection for life.

‘I am thrilled to have written this novel for the BTRC and to be donating the proceeds to such an important and dedicated charity for the welfare of retired racehorses.’ Emily Williams

I have to make a little admission before I start my review, the thing is I like horses but I'm slightly afraid of them! The idea of horse riding sounds lovely but I just think I would be too scared to try. Although maybe I should be brave like Rafferty and give it a try. Now even though this book centres around a horse there is so much more to it than that. It has a depth that caught me out and within a few chapters I became completely wrapped up in the lives of Rafferty and his friends.

Rafferty Lincoln Loves... is a YA story but I also believe it would appeal to an older reader too, after all I'm 33 years old! If anything it made me remember my teenage years both the good and the bad. With swearing and some adult themes it could be more suited to an older teenager and up though. There is a more serious underlying storyline that captured my attention although I won't be giving away any spoilers. It's safe to say that it definitely pulled at my heart strings!

Emily Williams has created some wonderful characters and even though they had their flaws I still became attached to them. I have to give a special mention to Dexter as he was such a surprising character and with me having a little boy with the same name I guess I may have gravitated more to him but his story is special. Rafferty along with other characters made mistakes but this gave them all a more realistic edge and shows how our actions have consequences. After all day in day out we make decisions that can either work out or end in a bad way.

There are quite a few themes in this book such as bullying and teenage emotions that will resonate with quite a few people. Emily Williams has created such a wonderful heartfelt and engaging story that was a pleasure to read.

Rafferty Lincoln Loves... has a lovely combination of friendship, love and youthful adventure!

With thanks to Emily Williams for my copy. This is my honest and unbiased opinion.

Letters to Eloise by Emily Williams

Emily Williams lives by the seaside in  with her family and a menagerie of small pets. After graduating from  with a BA in Psychology, Emily trained as a primary school teacher and teaches in a local school.

Rafferty Lincoln Loves... is her first YA novel after the success of her debut adult novel, Letters to Eloise, released in 2017.