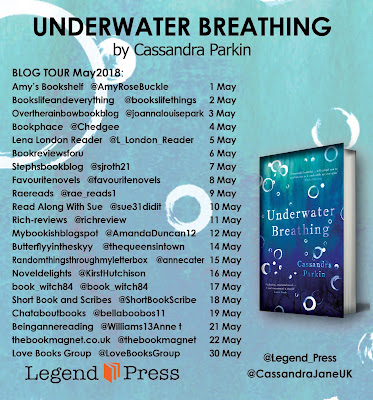 Thank you for stopping by I'm thrilled to be sharing my review for Underwater Breathing by Cassandra Parkin as part of the blog tour today. First of all though let's take a look at the description for the book... 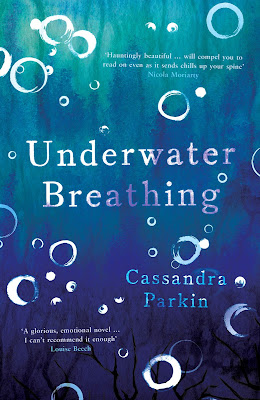 On Yorkshire’s gradually-crumbling mud cliffs sits an Edwardian seaside house. In the bathroom, Jacob and Ella hide from their parents’ passionate arguments by playing the ‘Underwater Breathing’ game – until the day Jacob wakes to find his mother and sister gone.

Years later, the sea’s creeping closer, his father is losing touch with reality and Jacob is trapped in his past. Then, Ella’s sudden reappearance forces him to confront his fractured childhood. As the truth about their parents emerges, it’s clear that Jacob’s time hiding beneath the water is coming to an end.

When I first read the description for Underwater Breathing I was really intrigued as I wasn't quite sure what to expect. I guess in a way it can be all the more interesting when you have no idea where the plot will take you. Cassandra Parkin has a very vivid and distinct way of bringing her stories to life and this book is a great example of this. I felt completely immersed in both the story and the characters lives. The house on the cliff is described perfectly along with seeing the wild terrain brought to life as I read.

I enjoyed the different time lines as it really helped to move the story along and explain the events from the past. The pacing of the story moves at a steady pace but I really felt involved in the story. With secrets in the past waiting to be revealed along with plenty of emotion. The characters in this story are so very interesting both in the past and the present. There are some surprises too which I really don't want to go into detail about as no one like spoilers. There are some sensitive issues within the story and an almost darker aspect too. Underwater Breathing completely held my attention from the very beginning right through to the last page!

With thanks to Imogen at Legend Press for my copy.