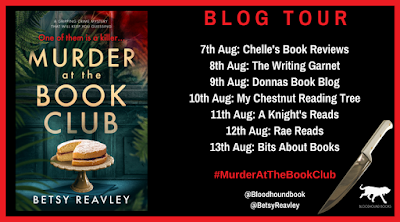 I'm thrilled to be taking part in the blog tour for Murder at the Book Club by Betsy Reavley and sharing my review today. Thank you to Sarah at Bloodhound Books for the invite to join the tour. 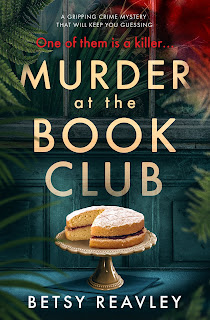 When the body of a woman is discovered on the common, DCI Barrett and DI Palmer are called in to investigate. But the motive behind the crime isn’t easy to identify... And it all comes back to a book club.
Imagine nine women meeting. Tea and cake is on the coffee table. They’ve come together to share their love of books. They are friends. They trust each other. It’s a happy gathering.

What could be more harmless?

Then scratch the surface and look closer.

One is lonely. One is desperate and one of them is a killer.

As the lies, volatile friendships and tension among the group rise to the surface, DCI Barrett and DI Palmer must work out the motive and track down a cold-blooded killer. But just when they think they are on the right track, a twist in the case throws them off course...

Everyone has their secrets.

This book is centred on a group of people who attend a book club, whenever you get a gathering of people it is might be normal for disagreements or arguments to take place but nobody expects murder! The story moves quickly and I was easily caught up in the drama of the characters lives as secrets slowly surfaced. With a few twists to keep me on my toes I loved the idea of how everything looks calm on the surface but look beneath and it is an entirely different situation.

I do have to mention the cover somewhere in my review just because as soon as I saw it I fell in love, anything with cake is a winner for me!

There are quite a few characters however they all have differing personalities with flaws and quirks that make you invested in seeing their story play out. I didn't know who to believe or what to think as slowly but surely the truth begins to emerge about fragile friendships and relationships. Even though there was drama there are some relatable characters along with some you wouldn't necessarily be friends with and certainly not want as an enemy!

Books, murder and a fabulous mystery all wrapped up in Murder at the Book Club!

Author of The Quiet Ones, The Optician’s Wife, Frailty, Carrion, Beneath the Watery Moon and the poetry collection The Worm in the Bottle. Betsy was born in Hammersmith, London.

As a child she moved around frequently with her family, spending time in London, Provence, Tuscany, Gloucestershire and Cambridgeshire.

She showed a flair for literature and writing from a young age and had a particular interest in poetry, of which she was a prolific consumer and producer.

In her early twenties she moved to Oxford, where she would eventually meet her husband. During her time in Oxford her interests turned from poetry to novels and she began to develop her own unique style of psychological thriller.

Betsy says “I believe people are at their most fascinating when they are faced by the dark side of life. This is what I like to write about.”