Valentina Harrison is a PA at an international advertising agency but when her boss disappears, James Spencer is flown in from the New York office to take over the helm.
James is handsome, successful and arrogant, Valentina is intelligent but, compared to the other fashionistas in her Milan office, rather plain and different. Because of this James treats her with contempt; needless to say Valentina can't stand him.
As their work brings them closer together, James and Valentina discover that first impressions can be wrong, so very wrong... 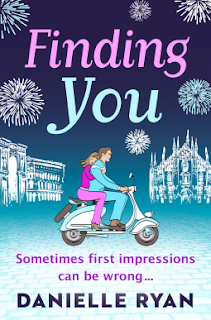 Valentina was an interesting character, to start with I have to admit I was a little indifferent towards her. She wasn't unlikeable just not really that engaging. As the book progressed her character really improved. By the end I felt like I got to know her pretty well.

I had a similar issue with James I wasn't sure I would like him as at the start he appeared arrogant and a bit sexist. However as a character he did grow and he developed into a much more likeable person.

I liked the fact that my opinion changed towards the characters as I carried on reading. It is definitely true that first impressions can be wrong.

The story is very easy going and the plot is straightforward. I liked the interactions between Valentina and James and they had a good chemistry.

By the end of this book I had grown to really like the characters. The story kept my interest and I managed to finish this book quite quickly.

Finding You is an enjoyable book that left me with a smile!

Thank you to Aria & Netgalley for my copy this is my honest and unbiased opinion.