Rae reads... All Fall Down by Tom Bale

You tried to save a life. Now you’re fighting to save your own.

It should have been an idyllic day for the Turner family – until a dying man, beaten beyond all recognition, arrives at their home, uttering the words, HELP ME.

Rob and Wendy Turner and their children try to explain away the horrific scene as being in the wrong place at the wrong time, but in the days that follow their lives are threatened in ways they could never imagine.

The family is unaware that they are being watched by someone with their own terrifying agenda, who will stop at nothing to fulfil their own twisted desires.

But when hidden secrets come rushing to the surface, it’s clear not everything is as it seems in this happy family.

Are the Turners a victim of circumstance – or does the key to their fate lie closer to home?

Forced to fight for everything they hold dear, can they save themselves before time runs out – or will their act of compassion see them paying the ultimate price…? 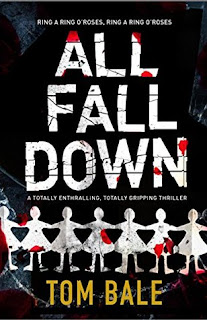 After previously reading See How They Run by Tom Bale I was looking forward to his next book. As soon as I saw All Fall Down available on Netgalley and after reading the synopsis I knew I had to read it!

My main thought to be honest was could it compete with See How they Run. I had really enjoyed the story and it was a worry I wouldn't like this one as much.

Everything begins normal enough a typical family enjoying a barbecue until something happens that shatters the peace. From then on things occurred that had the tension simmering under the surface slowly bubbling up. There were plenty of occasions where I felt like I was on the edge of my seat. I just didn't know what would happen next.

I loved that my attention was kept throughout, the story flowed really well. On quite a few occasions I was left feeling tense and unsure about what was to come. I don't really want to give too much away as it would ruin the story. However I will say as the reader you are taken on quite a journey filled with suspense, tension and shocks.

The characters are developed well with personalities that aren't as straightforward as I originally thought. Even though the main characters had flaws. I still hoped that things would work out okay in the end for the family. I always think it makes it all the more realistic if you don't like every aspect of a characters personality.


In the end I would say that All Fall Down felt different to See How They Run even though a family is at the core of both stories. I think this is a good thing as I didn't end up comparing them to each other. I could see them as two seperate books that I really enjoyed but for different reasons.

At times I didn't want to put this book down however silly things like sleep managed to get in the way! Just like with See How They Run I will definitely be recommending this book to friends, family and of course to whoever reads this review.

All Fall Down has the perfect mixture of tension and suspense with a plot that grabbed my attention from the start!

Thank you to Bookouture & Netgalley for my copy in exchange for an honest and unbiased opinion.

Rae reads... See How They Run by Tom Bale