After the success of "Searching for Steven" and "Getting over Gary", this is the much anticipated third and final installment of the Whitsborough Bay series.

Sometimes, you can run from the past, but you can’t hide. Since the age of sixteen, Clare O’Connell has lived her life by four strict rules:
1. Don’t talk about Ireland
2. Don’t think about Ireland
3. Don’t go to Ireland
4. Never let anyone in
And so far, it’s worked well. She’s got a great career, some amazing friends, and she’s really happy. The future’s all that counts, isn’t it?

However, when her boss insists she travels to Ireland to repair a damaged relationship with a key client, Clare finds herself drawn back to the small village of Ballykielty where she comes face to face with the one person she’d hoped never, ever to see again.
With the door to her past now wide open, the first three rules have gone out of the window. Can Clare stick to rule number four? 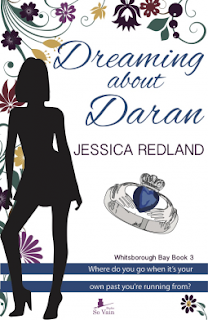 Clare is such a likeable character she comes across as tough but has a hidden past that is pretty heartbreaking. I thought Ben was great and so supportive.

The flashbacks were a great addition to the story. I liked how information was revealed bit by bit. I got a quite emotional at times that's how much I was pulled into the story. The story moved at a brisk pace and I found I was half way through the book before I even realised. Its not as light as Getting Over Gary as there are some serious issues that are brought up but they are handled well.

I enjoyed Getting Over Gary but I think this book just jumps ahead of it. I loved both the story and characters.

Dreaming About Daran is emotional, engaging and is a lovely end to the Whitsborough Bay series!

Thank you to So Vain Books & Netgalley for my copy in exchange for an honest and unbiased opinion.