Lonnie is stabbed to death while his sister, Mirage, is in a black out. Did she kill him? Gallup, New Mexico provides the backdrop for greed, scrambled brains, illicit love, and murder in this mystery thriller.

Cinnamon and Burro trail a gallery owner, a young boy with TBI, and a group of greedy young artists through the high desert, looking for a murderer. Burro suffers visions of the crime. Spirits communicate with the suspects. Cinnamon and Burro search for answers and the illusive Momma makes a phone call from the past. 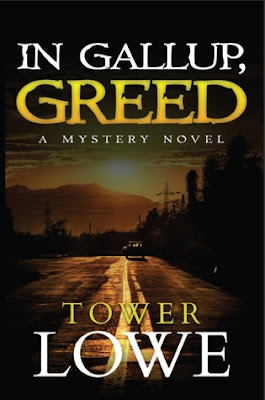 The characters in this book were all interesting. In Gallup, Greed has a good selection of characters all with a connection to each other. They had secrets and at times I wasn't sure if they were lying or being truthful. I thought that the partnership of Cinnamon and Burro was great, they worked really well together.

I really enjoyed the mystery of who murdered Lonnie running throughout this book. I also found the search for Cinnamon's mother a good addition to the plot. The story moved at a good pace with bits and pieces revealed along the way.

This isn't the first book in the Cinnamon/Burro New Mexico Mysteries but it is easy to follow so I would say it can be read as a standalone.

If you like a whodunit or mystery definitely give In Gallup, Greed a try!

Thank you to Tower Lowe who kindly sent me a copy of this book in exchange for an honest and unbiased opinion.