Rae reads... Sunshine on a Rainy Day by Bryony Fraser

About the book:
It’s Zoe and Jack’s first wedding anniversary party. They’ve got an announcement! They’re getting divorced.
Marriage isn’t for everyone – something that Zoe and Jack discovered only after they’d walked down the aisle. Bad timing, huh?
So now they’re stuck together in their once harmonious marital home, neither one of them willing to move out of their lovely house.
With Zoe’s three sisters always wanting a say, and Jack’s best friend trying his best to fix things between them, misunderstandings arise. Tempers flare. ‘Accidents’ happen…
Zoe and Jack are going to be lucky if they’re still alive when the twelve months are up. But maybe things aren’t quite as final as they seem?
A hilarious read, which reminds us that life doesn’t always go to plan… If you love Mhairi McFarlane, you’ll love this. 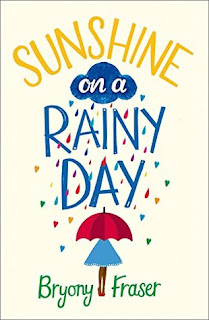 I thought that the relationship between Zoe and Jack was well written and very realistic at times, especially the petty arguments. I can definitely see where both sides were coming from. After my two children were born and after many a sleepless night my husband and I have had our fair share of these types of arguments. Then you realise how silly you both are and move on. However it is very easy to let these things build up! Zoe and Jack definitely show a good example of this and their complex relationship managed to keep me interested. I did find it hard to love Zoe's character at times as I didn't always agree with her actions. Both characters have their faults but this is a good thing as you get to see a very real couple going about their married life. Then realising that things aren't always absolutely perfect in a marriage.

This book had a way of drawing me into Zoe and Jacks story and I felt as if I was a part of their world. It isn't your typical romance and I enjoyed the change of formula. Various chapters show their past and how Jack and Zoe first met and how their relationship progressed onwards. It was an interesting way of showing them as a couple and how things were before they got married. Then it's back to the present and how everything has gone wrong between the pair. I wasn't sure if I would get confused because the story did go backwards and forwards in time quite a bit. However by the end of the book I did come to really enjoy the different mix of chapters.

Sunshine on a Rainy Day is an engaging and entertaining story!

Thank you to Avon Books & Netgalley for my copy in exchange for an honest and unbiased opinion.
at September 14, 2016