Blog Tour - Extract - Rules of the Earth by Wendy Cartmell 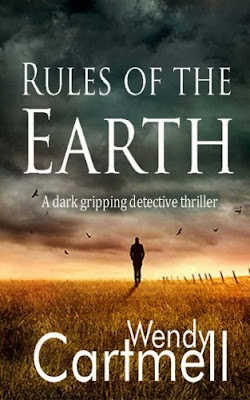 RULES OF THE EARTH

Sgt Major Crane is out of the army, out of a job and definitely out of sorts. So when DCI Anderson throws him a lifeline, Crane grabs it. A young girl has been found, dazed, bruised and mute. As Crane and Anderson try to find out what happened to her, another girl is found. But this time she's dead...

It was stifling inside the black hood and he was sure the pointed top was wilting in the heat; just as he was. The smell of the blood in the chalice was making him feel sick and, if he was honest, the last thing he wanted to do was to drink it. But the humiliation of not joining in the ceremony was probably worse than taking a drink. Just.

He and his fellow supplicants formed a semi-circle around an altar, upon which lay a young child: she was very much alive but drugged to keep her quiet while the bloodletting took place. Her long blond hair was in dramatic contrast to the plain black shift that she wore. Her face was white, lips flesh coloured and only the faintest rising and falling of her chest indicated that she was breathing. On the back of one hand was a needle that fitted snugly into her vein. Attached to the needle was a small plastic tube that allowed her precious blood to drip out into the chalice. She could have been asleep, instead of unconscious. Around her were placed seven candles, six black and one white, their flames guttering and smoking in the hot fetid air.

Normally children were banned from attending these rituals, the only exception being the Satanic baptism, which was specifically designed to involve infants, and such a baptism was taking place in the basement of a remote house in the dead of night. It was a ceremony deemed to be necessary to override any Christian or other religious ceremonies that the child may have been subjected to before joining the Satanic Church. He wasn’t so sure it was necessary himself, but then all the churches had their rules, didn’t they? He guessed it was no different to a Catholic first communion or a Jewish Bar Mitzvah and so he’d decided he may as well play along. Let’s face it he had nothing better to do that night. And as he was moving soon, he’d thought he’d better make the most of the last meeting he would be attending.

As the chalice was passed to him he muttered the rite: Cursed are the lambs of God for they shall be bled whiter than snow.

Taking the tiniest of sips but still gagging on the foul taste of the blood, he just about managed to swallow it instead of coughing it out and spraying it all over the child. Thankful that he’d managed to get through it, he passed the cup to the next in line. To be fair, the group had tried to adhere as closely to the ritual as they could, using the rules described in the Satanic rituals, or dramatic performances as they were sometimes called. They followed the suggestions of the clothing to be worn, the music to be used and actions to be taken. It was said that the pageantry and theatricality was intended to engage the participant’s senses on all levels. He could relate to that, for apart from the blood, the rest of it was definitely working for him.

All the males wore black robes and hoods but the young women were encouraged to make themselves attractive to the males present. As a result he was surrounded by a surfeit of black leather and rubber, long shiny thigh length boots and even the odd whip or two. Everyone wore the sign of sulphur around their necks. The intent of the women to stimulate sexual feelings amongst the men was exciting and he couldn’t wait for the bloody ceremony to be over, so they could get on with the really interesting part, the part that started once the ceremony ended.

The Church of Satan smashed all concepts of what a ‘church’ was supposed to be. It was a temple of indulgence, where one could openly defy the temples of abstinence that had previously been built. Rather than an unforgiving, unwelcoming place, as so many of the church’s built by religions that worshiped God were, theirs was a place where you could go to have fun. It was a religion based on self-indulgence, of carnality (of the here and now instead of the there and then), and, most importantly to him, of pleasure instead of self-denial.

At last the final person drunk from the chalice, the welcome sound of the bell ringing nine times rang around the room, signalling the end of the ceremony. The formal part over, it was time for the only reason he was there. It was time for the fun to start…. 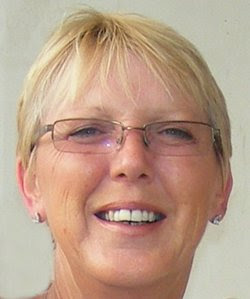 Wendy Cartmell is the author of the Amazon #1 Bestseller STEPS TO HEAVEN. She lives on the Costa del Sol with three mad dogs and her even madder husband. She inherited her love of reading from her parents and discovered her ability to weave a good story at Reading University, which she attended at the tender age of 40.

After several failed attempts at writing in various genres, Sgt Major Crane, a military policeman, knocked on her proverbial door and the rest, as they say, is history. All 8 Crane crime thrillers are published by Endeavour Press, as well as the Emma Harrison mystery trilogy, set in Reading Young Offenders Institution.

The book is free during the tour so grab your copy from AMAZON today!!!