Thank you for joining me for my stop on the Blog Tour for Of Life, Death, Aliens and Zombies by Dario Cannizzaro.

Today I have a great guest post and there is also a giveaway to enter.

First of all let's take a look at the book... 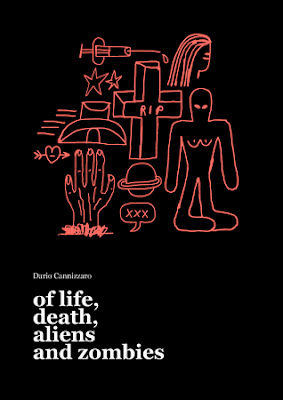 Misnomer on purpose, this amazing debut rocks nine short and amusing stories - a Zombie Apocalypse without zombies; the Vatican announcing contact with Aliens; a heroin junkie that loves poetry; a timeless love, and much more.

Ordinary characters facing extraordinary situations, dry humor, philosophical musing dressed as whimsical, offhand commentary, and a fairy-tale like writing; those are the key elements of the style of this funny and thought-provoking collection.

“An author who will stun and amaze you and make you laugh and perhaps cry”
- Pam S. Dunn, author of Sunflower

“I haven't really been introduced to a voice as Zeitgeisty as this since Alex Garland”
- Fabian, GoodReads Top Reviewer

“Would calling it a literary masterpiece be an exaggeration? I hope you will be able to tell me that after you read it”
- Bernard Jan, author of Cruel Summer

One of my favourite authors, Cormac McCarthy, once said, “I'm not interested in writing short stories. Anything that doesn't take years of your life and drive you to suicide hardly seems worth.”
Of course I read this quote exactly when I was writing short stories again. At that particular point, he almost convinced me that my stories shouldn’t see the light of day, and should stay in my digital drawer forever.

But then I realised something. Cormac McCarthy, for how amazing he might be, said what he said because he didn’t feel he was good enough to write short stories.  He did wrote two shorts indeed, Wake for Susan and A Drowning incident, while he was still in College. And if you read them, while you’ll see the genius lying behind the phrases, you wouldn’t recognise Cormac.

That’s because short stories are hard. And actually, a good short story is harder than a full novel. Yes, in a novel you need to be careful with timing, consistency, and keep the reader entertained until the end. But the power of a longer work resides in the fact that, if you played your cards correctly, the reader will want to know how it ends, because (s)he’s invested a good amount of time in the characters already.

In a short story, you need to pack a story, a meaning, sympathetic characters, antagonists – all in a short space. Short stories are the chocolate pralines of baking – you see those little things and think they’re awesome, and you can eat a whole bunch of them, but you never stop to think how much time a single one took to make.

That’s when it hit me. Instead of sending the short stories out and get them published on Literary Magazines (which I did in the beginning, and I thank the magazines who published them – check out where you can read some of them for free on www.dariowrites.com ), I should organise them in a collection; much alike chocolate pralines, a single one might not placate the hunger, but a box of them might work just fine.

So here it is, my box of chocolates for you. Someone said about chocolate boxes, You never know what you’re gonna get,  but that’s part of the beauty; you will find some of them incredibly tasty (Bathroom Love) and would wonder why you don’t have more of it, while some other might be less punchy but leave a lingering aftertaste (The Announcement). And at the end, there’s also a bigger slice of cake (Impurita’), for the reader who will find himself or herself hungry after all that amuse-bouche.

DARIO CANNIZZARO was born in the sun-eaten Naples, Italy in 1982. He moved to Ireland in 2011, and has called it home ever since. He started writing short stories at seven, which are shamefully lost forever, but has never stopped writing since. His works have been published in Italian and English in Literary Magazines such as The Galway Review, Two Thousand Words and Chantwood Magazine.

This giveaway is for 1 paperback copy of the book (UK only) as a first prize and 3 digital copies of the book.

a Rafflecopter giveaway
at February 14, 2017