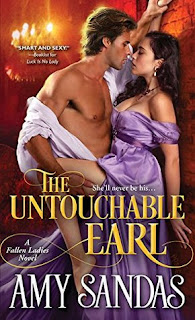 He's a reclusive Earl with a painful secret that's kept him from knowing a lover's touch. She's a sheltered debutante tired of living by society's rules. But when she's forced from the ballroom to the brothel, Lily discovers the dark thrill of falling from grace...and into the arms of a man who could destroy her as easily as he saved her.
Lily Chadwick has spent her life playing the respectable debutante. But when an unscrupulous moneylender snatches her off the street and puts her up for auction at a pleasure house, she finds herself in the possession of a man who fills her with breathless terror and impossible yearning.
Though the Earl of Harte claimed Lily with the highest bid, he hides a painful secret―one that has kept him from knowing the pleasure of a lover's touch. Even the barest brush of skin brings him physical pain, and he's spent his life keeping the world at arm's length. But there's something about Lily that maddens him, bewitches him, compels him...and drives him toward the one woman brave and kind enough to heal his troubled heart.

This is the second book in the Fallen Ladies Series, I haven't read the first book Luck Is No Lady (Fallen Ladies Book 1) and there was no confusion whatsoever. I would say that The Untouchable Earl can easily be read as a standalone however after reading this book and getting to know Lily's sisters I would like to read Emma's story to see how everything came about.

There was instant chemistry between Avenell and Lily I definitely felt the connection that they shared. I was interested to see how things were going to play out in relation to Lord Harte's affliction and if it could be resolved. Avenell is a complex character that I definitely grew attached to and I really hoped that there would be a happy ending. Lily is a strong character who definitely knows her own mind. Although I did think that she rushed into things really quickly with Avenell. However after you get a glimpse of their attraction to each other then maybe it isn't all that surprising. I liked the fact that the person who puts her in the situation of being auctioned off was given a back story and it wasn't a clear cut situation of being an out and out bad guy. Although I have to admit he was pretty despicable for kidnapping Lily in the first place.

The story moved at a good pace and I enjoyed the plot of the family debt and also the back story of Lord Harte and how his troubles started. If you want to relax and read something light hearted to pass a couple of hours then The Untouchable Earl would be ideal!


Steamy with a dash of romance!

Three and a half stars from me!

Thank you to Sourcebooks Casablanca & Netgalley for my copy. This is my honest and unbiased opinion.
at February 03, 2017