Thank you for joining me on the blog tour for Across Great Divides by Monique Roy. I have an excerpt to share with you today along with a great giveaway to enter. Across Great Divides is a timeless, World War II story of the upheavals of war, the power of family, and the resiliency of human spirit. When Hitler comes to power in 1933, one Jewish family refuses to be destroyed and defies the Nazis only to come up against another struggle—confronting Apartheid in South Africa.

As Jews, life becomes increasingly difficult for identical twin sisters Eva and Inge under the oppressive and anti-Semitic laws of Nazi Germany. After witnessing the horrors of Kristallnacht, they flee their beloved homeland, finally finding a new home for themselves in the beautiful country of South Africa; however, just as things begin to feel safe, their new home becomes caught up in its own battles of bigotry and hate under the National Party’s demand for apartheid. Will Eva and Inge ever be allowed to live in peace? Across Great Divides is a tale of one family’s struggle to survive in a world tainted with hate, and the power of love that held them all together.

On a warm, breezy night in May 1933, walking home from a dinner party, Eva came upon a large crowd of people in the cobblestone public square, Opernplatz, opposite Humboldt University and next to the seventeenth century opera house. Curious about the gathering, she stood at the back of the thickly lined, rowdy crowd and within seconds, fear grew within her. A sick feeling in her stomach emerged twisting it into knots. Nazi storm troopers and German students from universities, once regarded with prestige, stood around a bonfire and tossed thousands of books to the flames. While doing so, they cheered, gave the Nazi salute, and proudly waved the Nazi flag.

To Eva’s horror, she realized that these books weren’t just any books; they were books that they all knew well, that she had read, and that went against Nazi ideology. The German campaign to purify its language and intellectualism was well underway. When the Brown Shirts (Sturmabteilung) threw more fuel to the roaring fire proceeded by thundering “Heils” and rejoicing, she knew this barbaric event would go on for hours and the heaps of books scattered on the ground would all turn quickly to ash. No books would be spared. German spirit would triumph. Her eyes scanned the crowd around her. Who were these people so actively engaged in this heinous activity? Did they not see the wrong? The cheering and laughter around Eva and the enthusiasm from the crowd proved this wasn’t just an event, it was a celebration.

People cheered and clapped when a familiar face in the Third Reich, a man named Joseph Goebbels, Reich Minister for Propaganda, appeared in the center of the crowd. He was a small man with a crippled foot, a disproportionately large head and a fragile body. A psychological master, he addressed the crowd with an official stamp from the government.

Immediately silence blanketed the crowd as he mesmerized them with these words:

"My fellow students, German men, and women, the era of exaggerated Jewish intellectualism is now at an end. The triumph of the German revolution has cleared a path for the German way. And the future German man will not just be a man of books, but also a man of character and it is to this end they want to educate you. To have at an early age the courage to peer directly into the pitiless eyes of life. To repudiate the fear of death in order to gain again the respect for death. That is the mission of the young and therefore you do well at this late hour to entrust to the flames the intellectual garbage of the past. It is a strong, great and symbolic undertaking, an undertaking, which shall prove to all the world that the intellectual basis of the November Republic is here overturned; but that from its ruins will arise victorious the lord of a new spirit."

The Nazis had declared war on reason itself.

Monique was born in Cape Town, South Africa, and her grandparents were European Jews who fled their home as Hitler rose to power. It's their story that inspired her to write Across Great Divides. She is also the author of a middle-grade book, Once Upon a Time in Venice, and Monique is working on her third novel, which also takes place during the World War II era.

The giveaway is for 2 ebooks of the book – 2 different winners.

Why not follow along with the rest of the tour, you can check out the schedule below! 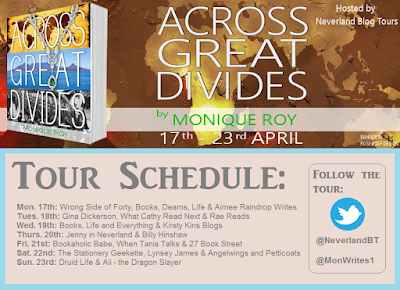