Written into the Grave by Vivian Conroy @VivWrites #GuestPost #BlogTour 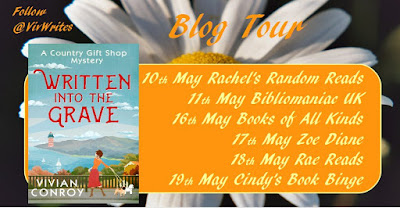 I am delighted to be involved in the blog tour for Written into the Grave by Vivian Conroy. Today I have a great guest post to share but first of all let's take a look at the description for the book... 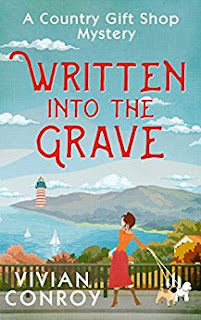 Vicky Simmons’s life was supposed to be relaxing after she moved back home to the coast of Maine, but instead of baking bread and gardening she’s been chasing down killers and it’s time to stop. Vicky is ready to slow down again and vows to start focusing more on her roses than solving crime.
That is until she reads the new serial in the paper over breakfast, describing a brutal murder that takes place on a cliff top road just above a beach. Only to find herself moments later, walking Coco and Mr. Pug, face to face with a dead body on the sand. The murder victim described exactly as he was in the story…
Once again death has come to Glen Cove and this time Vicky and her friends won’t stop until they find the killer before they get away with murder.
Don’t miss any title in the Country Gift Shop Cozy Mystery series:
Book 1 - Dead to Begin With
Book 2 - Grand Prize: Murder!
Book 3 - Written into the Grave


WRITTEN INTO THE GRAVE, released last week, is my 6th published
book, and the third installment in the Country Gift Shop series. As
I take care to wrap up the mystery in each book, you can read the
books as standalones and - if you like - go back to earlier books
later. I myself came to many series (for instance my alltime
favorite Brother Cadfael by Ellis Peters!) through a later
installment and then went back. Writing a series, you take many
things into account: how relationships will develop, how the clues
and red herrings can stay fresh, and how the titles differ enough to
distinguish between the books, while they still have to fit a
pattern: have to sound like cozy mystery.

For me the title of book 1 offered itself quite readily: the book is
about someone returning from the UK to Maine to start a British gift
shop, and the mystery unfolding has to do with an earlier mystery,
the disappearance of a college sophomore twenty-three years earlier.
DEAD TO BEGIN WITH seemed like a perfect choice (and a fun play on
Dickens' Christmas Carol which I adore, especially in the
Muppet adaptation!). DEAD TO BEGIN WITH conveys that the book is a
first in a series, that it's a new beginning for Vicky as gift shop
owner, and that her return to town is both joyous and warm but also
slightly overshadowed by renewed interest in the old disappearance
case. Has the missing girl been 'dead to begin with' from the day
she disappeared?

For book 2 the title was a no brainer as well: it's about a bookish
treasure hunt where the inhabitants of Glen Cove compete for two
tickets to London. But a dead body changes the game... GRAND PRIZE:
MURDER! was born. And like someone messaged me on Twitter: "it's a
whole story in 3 words!"

My working title for WRITTEN INTO THE GRAVE was MURDER IN
INSTALLMENTS as it began with the idea of a serial written by a
writing group, turning deadly when one installment describes a
murder that really takes place right as the paper is delivered to
the unsuspecting inhabitants of Glen Cove. Because of the word
MURDER in it, and the fact it had also been used in the title for
book 2, I was asked to come up with something else. Brainstorming
titles is fun: just sit down with a notebook and write down anything
that comes to mind. Then cross off all those that don't work (too
long, not conveying concept properly etc) and you're left with the
right one. Once I had it, I was completely fan of WRITTEN INTO THE
GRAVE, and the supporting tagline: Can fiction kill?

Can you actually write up a story in which somebody dies and voila,
according to your wishes, the victim does die? Of course not. Still,
in a way the victim in this book gets written into his grave...
You'll have to read it to find out how! By the way, I love how the
design team came up with an atmospheric cover to match the title!
And contrary to the first two books where there is more of a buildup
to the murder, I started off this one with Vicky reading the serial
installment, finding it kind of chilling, and then on her walk with
Mr. Pug and Coco, running into the murder scene. Action from the
get-go and plenty of twists until the killer and the motive is
revealed.

As this blog tour of WRITTEN INTO THE GRAVE draws to an end, I'm
super excited to lift a tip of the veil: I have a brand-new mystery series
coming in the summer. Can I just say castle on a tidal island off
the coast of Cornwall? How cool is that? And the title I came up
with for the first book reveals something about the main character
and the plot. All wrapped up in four little words. But that is a
subject for another time...

Do drop by on Twitter via @VivWrites to
share what book titles you think are really captivating, clever or
atmospheric!

Thank you to Vivian for this fab guest post, I am always interested in how authors come up with the titles for their books so this was a great insight!

I don't know about you but I can't wait to find out more and read Vivian's next book!

For all things books, with
a dash of dogs and chocolate, give her a follow on Twitter via
@VivWrites. You can also add and review all her books on Goodreads
and LibraryThing.
at May 18, 2017