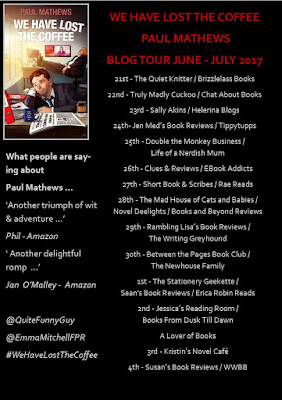 Thank you for joining me on the blog tour for We Have Lost the Coffee by Paul Mathews. Today I am sharing a guest post by Paul but first of all let's take a look at the description for the book... 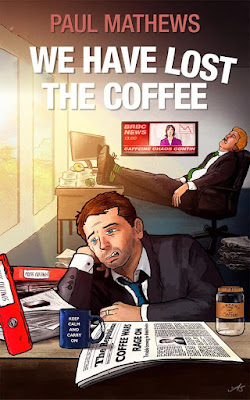 Title: We Have Lost the Coffee
Author: Paul Mathews

London, 2045. Three months into the Coffee Wars and Britain’s caffeine supplies are at critical levels. Brits are drinking even more tea than usual, keeping a stiff upper lip and praying for an end to it all.
A secret government coffee stockpile promises to save the day … but then mysteriously disappears overnight.
One man is asked to unravel the missing-coffee mystery. Hs name is Pond. Howie Pond. And he’s in desperate need of a triple espresso. Meanwhile, his journalist wife, Britt, is hunting royal fugitive, Emma Windsor, on the streets of the capital.
Can Howie save the British Republic from caffeine-starved chaos? Will the runaway royal be found? And just what will desperate coffee drinkers do for their caffeine fix? Find out, in Paul Mathews' latest comedy adventure set in the Britain of the future ...

This post is about things that get you all discombobulated once they are over, like a meal you never want to end, films you could watch over and over again, and songs you could listen to on repeat, all day, every day.

There are just eight simple questions:

Who are you and what do you do?

My name is Paul Mathews and I spend an awful lot of time on my laptop – some of which involves writing, editing and publishing comedy-thriller novels.  The rest of the time I’m usually immersed in social media, checking my sales figures, reading my Amazon and Goodreads reviews and doing all the other admin that comes with being a full-time indie author. It’s very time consuming but all great fun.

What gives you an actual hangover?

Alcohol mainly …! I find a couple of wheat beers can give me a headache. Or those horrible bottled lagers that are full of chemicals. Ugh!

I only watch films these days. But I used to be a big fan of Coronation Street. There is a lot of humour in that show, with more than a hint of pantomime in characters such as Norris Cole. It must be so much fun to write and act.

Comedy wise, I loved Blackadder back in the 1980s and re-watched the series that was set in Elizabethan England many times on home video. Brilliant scripts, brilliant comedy and brilliant actors. I was also a big fan of Men Behaving Badly with Martin Clunes with its cheeky humour and great characters – it was the kind of show you never wanted to miss.

The Hangover (appropriately for this post!) is a great comedy film. Any movie that begins with some guys finding a tiger in their hotel bedroom is always going to be a winner! I also saw a very funny 2008 film recently starring Ricky Gervias, called ‘Ghost Town’, about a dentist who has a near-death experience and then starts seeing really annoying ghosts. I’d never heard of it before, but it was laugh-out-loud funny.

I listen to all sorts – 1980s, electronic dance music and cheesy pop. One song I can listen to relentlessly is a dance track called ‘Theme to S-Express’ by S-Express from the 1980s. It was one of the first vinyl singles I bought and I played it in between GCSE revision breaks. It’s nearly thirty years since I took those exams, but the song has aged well …but not quite as well as me, I like to think …!

This is a tough one. I love Spaghetti Bolognese. My wife makes it with ginger, which is even better, and sometimes she substitutes minced turkey for beef, which gives it a subtler flavour. (I don’t cook. I just eat!) I also love Aberdeen Angus Steak, pizza and a decent sausage. Not at the same time, though – that would be greedy.

I would probably freak out if I ever met Tom Hanks or Matthew McConaughey – both are great actors whose films are almost always fantastic to watch. Anyone representing a major publisher who was carrying a large cheque book would also get my knees trembling …!

And finally, … Which book?

The Hitchhiker’s Guide to the Galaxy by Douglas Adams. I actually discovered the BBC TV series first (it was originally a radio series) and then progressed to the books. The TV series is still very watchable today – although Zaphod Beeblebrox’s second head is a bit rubbish! I recently bought the first four books in hardback and will try and read them again. I really enjoy Douglas Adams’ irreverent style of British humour and I always include a reference to the major number of forty-two in all my novels. For example, We Have Lost the Coffee has forty-two chapters and my main character, Howie, is forty-two.

Thank you to Paul for the brilliant guest post! 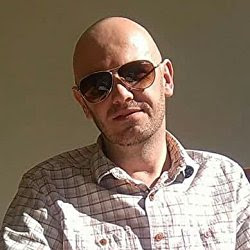 Paul Mathews is a 40-something British guy who's given up his 9-to-5 job in London to become a full-time comedy novelist. Why did he make this bold step? Well, he'd had enough of crazy managers and uncooperative printers. So one afternoon, after nearly 20 years working at the heart of the British Government, he shut down his computer, deleted all his emails and escaped the office - never to return. (Okay, it wasn't quite as dramatic as that, but he is a fiction writer, so please cut him a little slack.)

His two decades working as a Government press officer gave him an invaluable insight into all the key elements of modern government: bureaucracy, bungling, buffoonery, buck-passing and other things that don't begin with the letter 'b' - such as politicians with huge egos and very little talent. He's now putting that knowledge to use by writing about a British Government of the future - where, believe it or not, the politicians are even bigger idiots than the current lot.

Before becoming a PR guy, he was an accountant. But he doesn't like to talk about that. And going back further, he went to Cambridge University and studied philosophy. Despite thousands of hours of thoughtful contemplation, he still hasn't worked out how that happened. The highlight of his university years was receiving a £300 travel grant to visit Prague and 'study philosophy'. It was a trip which ignited his love of Eastern Europe where he spends a lot of time writing and drinking black beer.

Other interests include wearing sunglasses and having his photograph taken. Visit his website for more info on this (allegedly) humorous man: www.iamthe.website