#CoverReveal A Shape on the Air by Julia Ibbotson @JuliaIbbotson @BrookCottageBks

I am delighted to be taking part in the cover reveal for A Shape on the Air by Julia Ibbotson. So let's take a look... 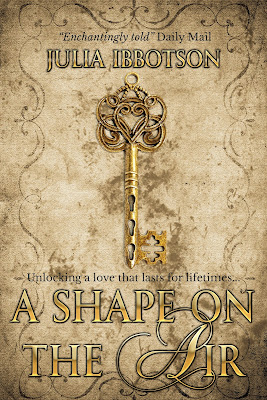 AMAZON
Two women 1500 years apart. One need: to save the world they know. Can they help each other to achieve their greatest desire? And what if that world they want is not the one that's best for them?  University lecturer in medieval studies, Dr Viv Dulac, is devastated when her partner walks out (and with her best friend too!) and threatens her home.  Drunk and desperate, her world quite literally turns upside down and she finds herself in the body of the fifth century Lady Vivianne, who is struggling with the shifting values of the Dark Ages and her forced betrothal to the brutish Sir Pelleas who is implicated in the death of her parents. Haunted by both Lady Vivianne and by Viv's own parents' death and legacy, can Viv unravel the web of mystery that surrounds and connects their two lives, and bring peace to them both? A haunting story of lives intertwining across the ages, of the triumph of the human spirit and of dreams lost and found. 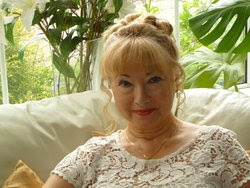 Award winning author Julia Ibbotson lives with her second husband in the heart of England in a renovated Victorian rectory, and, their four children having grown up, she is now suffering from empty nest syndrome. She is obsessed with the medieval world and concepts of time travel (and chocolate) (and cakes …).  She read English at Keele University (after a turbulent but exciting gap year in Ghana) specialising in medieval studies. She wrote her first novel at 10 years of age, but life (and later the need to earn a living as a single mother) intruded and she became a school teacher, and then, on gaining her PhD as a (very) mature student, a university lecturer. Julia has written a memoir The Old Rectory: escape to a Country Kitchen (with recipes) and a children’s book S.C.A.R.S (a fantasy medieval time slip), before embarking on her Drumbeats trilogy (which begins in Ghana).  Her latest novel, A Shape on the Air, is a historical (medieval) time slip romance. Clearly, she is obsessed …  Apart from insatiable reading, she loves travelling the world, singing in choirs, swimming, yoga, baking, and walking in the English countryside.
Author page on Amazon:  http://www.amazon.co.uk/Julia-Ibbotson/e/B0095XG11U/ref=sr_tc_2_0?qid=1377188346&sr=1-2-ent
Facebook: https://www.facebook.com/pages/Julia-Ibbotson-author/163085897119236
Twitter:  https://twitter.com/JuliaIbbotson
Goodreads Author Page:  http://www.goodreads.com/author/show/6017965.Julia_Ibbotson
LinkedIn:   https://www.linkedin.com/in/dr-julia-ibbotson
Blog:   http://www.juliaibbotsonauthor.com
Website:  http://www.juliaibbotsonauthor.com
Pinterest:  http://pinterest.com/juliai1/