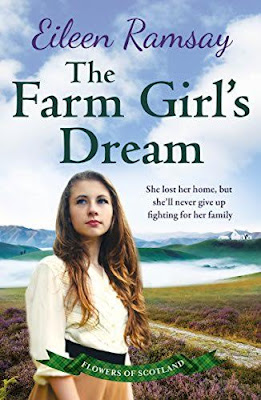 From the fields of Angus to the shores of Mexico, a family struggles to find their way home. Perfect for fans of Nadine Dorries, Rita Bradshaw and Kitty Neale.To young Victoria Cameron, Angus, Scotland is the most beautiful place on earth and she wishes nothing more than to stay on her little farm for ever. But the death of her beloved grandfather leaves her and her mother without a farm and struggling to make ends meet.Never one to give up, Victoria soon finds work in a Dundee mill, while her mother supports them by taking in lodgers. Neither ever expected one of those lodgers would be John Cameron, the father that walked out on them so many years ago.Victoria is torn about how to receive this stranger, and torn about the other man in her life - a young boy she thinks she could love if only he comes back from the war.

Also just to mention that A Pinch Of Salt, also by Eileen Ramsay, is re-released in paperback later this summer.
You can Pre-order here

The whole story whisked me away to another time and a different way of life, the plot moved smoothly and kept my interest throughout. Victoria is a great character she is completely likeable and I loved her strong and determined nature as she tries her best to turn both her own situation and her mums for the better. It was great to see her character grow and although she didn't have things entirely easy I enjoyed seeing her meet any challenge and work through her families troubles. One of my favourite characters was Dr Currie she is independent and such a good friend to Catriona and Victoria.

The Farm Girl's Dream is emotional at times but has an almost uplifting aspect to it too and this for me was a winning combination. I became attached to the characters and their lives and I really hoped for a happy ever after. There are lovely themes of family, love and hope that really appealed to me. I also enjoyed the side story of Victoria's father it made an interesting aspect to the plot.

It was so easy to be swept up in this engaging and delightful story. It isn't all light hearted and there is a depth to the story that made for compelling reading. I have to admit I quickly read this story and would be more than happy to read more books by Eileen Ramsay.


Engaging and full of hope!

With thanks to Bonnier Zaffre for my copy. This is my honest and unbiased opinion.

Victoria Cameron was so used to being the centre of attention that it came as rather a shock to find herself ostracized at the local primary school. Only the other social outcast, Nellie Bains, who wore ragged clothes, smelled and had a constantly dripping nose, wanted to play with her. And Victoria, who had been brought up to know her own worth, did not want to be anywhere near a dirty, ragged child like Nellie Bains. When she was small, Victoria saw only the rags, the tangled hair, the runny nose. She did not see the smile of pure friendship; she was too young and self-centred to glimpse the reflection of a loving heart.

‘Nobody plays with me, Mamma,’ Victoria complained. She did not mention Nellie, who was a nobody and therefore did not exist.

Catriona’s eyes filled with tears. How dare they make her child suffer? She hugged her daughter so hard that the little girl pushed herself away. She put her balled-up handkerchief into the front pocket of her hand-embroidered apron and tossed back her dark hair.

‘Nellie Bains said a bad word, a really, really bad word. She said I was one and none of the nice girls is allowed to play with me.’ She leaned towards her mother and whispered the offending word so quietly into her ear that Catriona, taken by surprise, asked her to repeat it, and was then both shocked and mortified that her little daughter had ever uttered such a word.

‘You are not,’ said Catriona angrily. ‘Shallow minds, with not enough to do but make up stories. Just never you mind, Victoria. Some day a really nice little girl will want to play with you.’

‘Why some day? And what does that bad word mean, Mamma?’

But Catriona refused to tell her, saying that well-brought-up children should not know such words. Victoria was looking both upset and slightly mutinous. Catriona desperately tried to find a solution and then she found one, but one that frightened her, for she was not used to confrontation. ‘I know, Victoria. I’ll come into the school and have a word with Miss Spencer.’

But the word with Miss Spencer did not mend matters, for Miss Spencer looked down her educated nose and told Catriona that it was all highly irregular and she could not control what the children learned in their own homes.

Catriona had never disliked anyone in her entire life. Even her philandering husband had received no criticism from her, but this was different: this concerned her child.

Narrow spinster, thought Catriona angrily. No wonder no man’s wanted her. Thirty years old, if she’s a day, and trying to look like a lassie.

But she was no match for the contempt of the other woman. Besides, Catriona had been brought up to think teachers superior to ordinary mortals. Were they not full of book learning? Some had even been to a place called the university. That inbred feeling of inferiority, however, was warring with her own very justifiable anger.

‘Just make sure you control what they learn here, miss,’ she said furiously and, head up in defeat, she walked away.

And then Nellie, angry that her offers of friendship were constantly being spurned, took matters into her own rather grubby little hands and told Victoria exactly what the bad word meant.

‘You’ve no pa, you stuck-up wee child, and your ma’s no better than she should be.’

Victoria looked at Nellie, at her dirty face and her snotty nose. She was not quite sure what Nellie was saying, but she recognized the vindictiveness with which it was said. She slapped Nellie hard across her wizened wee face. Then she turned and ran crying from the playground, and she did not stop running until she reached the haven of the farmhouse.
at June 22, 2017