I am delighted to be on the blog tour for The Mothers of Lovely Lane by Nadine Dorries. Today I have my review to share along with an extract from this wonderful book. First of all let's take a look at the description for the book... From the bestselling author of The Angels of Lovely Lane, The Four Streets and Ruby Flynn.
Noleen Delaney is one of an army of night cleaners at St Angelus hospital in Liverpool. Since her husband was injured in the war, she has supported her five children. With help from her eldest, Bryan – a porter's lad – the family just about gets by.

When Finn, her youngest, passes the eleven plus exam, Noleen feels faint. Allowing Finn to attend the grammar will stretch her purse too far.
When Bryan steps in to help, the results rock the St Angelus community. As the nurses of Lovely Lane near their final exams, Noleen will find herself tested, and her heart broken. Just how far can a mother’s love stretch?
Buy Link
Amazon UK

I hadn't read anything by Nadine Dorries before so I was unsure as to how I would find the story. There was no need to worry as within a couple of chapters I was pulled right into this story and didn't want to leave the St Angelus community behind.

The Mothers of Lovely Lane is about family, love and friendship but also has some real issues for the people of that era. There are changes in their lives with new progressive techniques being developed for the St Angelus Hospital. Also there is a different way of thinking for the people of that time. There is a little bit of everything some drama, relationship worries and criminal activity that definitely made sure my interest was held.

Comforting at times as there is a real sense of community and of helping out your neighbours. Although because of this they do know every little bit of each others business! Life isn't easy but everyone tries to pull together in spite of their troubles. Nadine Dorries has created some wonderful characters who felt so real to me the more I got to know them. It is the third book in the series so there are characters from the previous books. However I will say that even though I haven't read the other books there wasn't really any confusion. Mainly because there is a little bit of information given relating to each one. This is done in a way that doesn't interrupt the flow of the story. Anything to do with history is normally a hit with me and The Mothers of Lovely Lane is a beautiful story that took me right back into the past.

A delightful story with a wonderful set of characters!

With thanks to Suzanne Sangster & Head of Zeus for my copy. This is my honest and unbiased opinion.


When eight thirty arrived, Matron was ready. ‘I’ll be back shortly, Blackie, once I’ve seen these non-existent creatures Dr Gaskell insists are taking over the hospital, indeed.’ She gave Blackie a biscuit.
Blackie rolled on to his back, his four legs stuck straight up in the air in anticipation of a tummy tickle.
‘Not now, Blackie. When I return from this ridiculous bug- hunting mission, then I will take you for a walk. Later.’
Blackie quickly resumed his sitting position, his ears pricked and forward at the sound of his favourite word, head tilted to one side.
The lights of Dr Gaskell’s car lled Matron’s dark sitting room as his Austin slowed to a halt outside the main entrance to St Angelus, directly below her apartment. The engine died and as his car door squeaked noisily open, she made her way down the stairs towards the deserted and shrouded WRVS tea stand, where she had arranged to meet him.
‘Good evening, Margaret,’ said Dr Gaskell as he removed his gloves and walked towards her.
‘Honestly, you and your new-found modern ways. You have taken to calling me by my Christian name a little too often, Dr Gaskell,’ she said emphatically, prompting a smile in return.
She was secretly mattered that he occasionally called her Margaret. It made him almost a friend, not always just a colleague. She found it hard to admit this to anyone other than herself, but she had no friends. Her job had been her only friend down the years. Her mother, her nurses, her hospital – they were her life. And with the recent loss of her elderly mother she now felt even more alone: she no longer had her mother to visit, to care for and to love. But even when her mother was alive, Matron still hadn’t shared the sadness of the secret love she held deep in her heart. Sister April had walked out of the hospital gates to join the Queen Alexandra nursing corps during the war and never returned, and Matron had never spoken of it. Her secret was her cross to bear. It guaranteed her a lonely, friendless life because a friend was by definition someone she had to be honest with and if she couldn’t share the truth about who she was and what set her apart from every other woman she knew, what was the point?
As they walked together towards the theatre block, they passed Jake Berry, the under-porter, Elsie’s son-in-law, wheeling an oxygen bottle towards the children’s ward.
‘Is it all quiet in theatre, Jake?’ asked Dr Gaskell.
‘Oh, it is Dr Gaskell, sir. Matron. All quiet on casualty too. Fingers crossed, eh, that I haven’t spoken too soon.’ 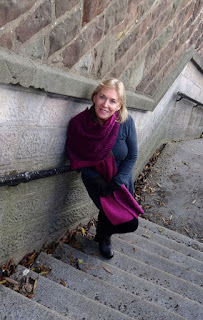 Nadine Dorries grew up in a working-class family in Liverpool and spent a great deal of time in Mayo with her Irish grandmother. She trained as a nurse and has been the MP for Mid-Bedfordshire since 2005. She has three daughters.

If you get chance why not follow along with the tour... 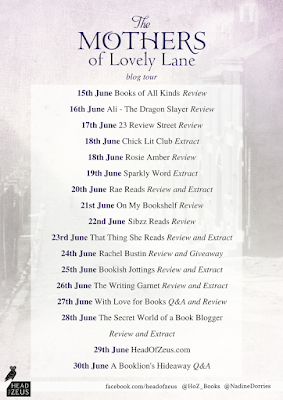