Did You Whisper Back? by Kate Rigby @NeverlandBT #WeekendBlitz #Review

Thank you for joining me today for this fab weekend blitz I have a review for Did You Whisper Back? by Kate Rigby and there is also a great giveaway to enter. 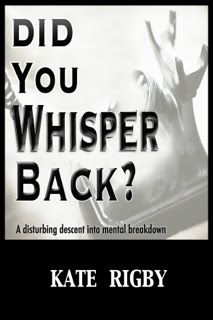 Set in the nineteen-seventies, Did You Whisper Back? begins with Amanda Court's longing to be reunited with her estranged twin sister Jo. Following a false lead, Amanda leaves her Merseyside home and family and goes to Devon to work as a chambermaid where she believes Jo now lives. Amanda's new life begins to encroach on her personal space and time, and her search for Jo is put on hold until Amanda feels Jo calling her back to Liverpool.

Gradually it emerges that Jo is, seemingly, just a figment of Amanda's imagination arising from distorted childhood memories. She experiences a series of strange and sometimes frightening experiences, including lamps talking and the endless ringing of telephones, until the desperation of her family reaches breaking point.

Did You Whisper Back? is a psychological novel about family secrets and a disturbing portrayal of the fragility of the mind.

This book was awarded a Southern Arts Bursary.

This story is full of secrets and lies with a family that is slowly unravelling bit by bit. I don't want to go into too much detail as I really would hate to ruin this story with spoilers. A few of the characters in Did You Whisper Back? have quite big flaws mainly due to the decisions that they made. It is quite hard for me to understand how they came to make them and how they ever thought it was a good idea. It's very easy to see how fragile Amanda is and it really is a rollercoaster of emotions as everything plays out. Along the way I definitely felt as if I was pulled into Amanda's life with details of how she felt and also her every day experiences.

It is quite a fast paced story and even though it is a shorter length there is plenty packed into the plot as Amanda's life slowly but surely begins to spiral out of control. It didn't take me long to read at all as I became invested in both the story and how everything would turn out for Amanda. There is a feeling of tension as the story progresses mainly because I didn't know which way the story would go.

Intriguing and full of secrets!

With thanks to Jenny at Neverland Blog Tours & Kate Rigby for my copy. This is my honest and unbiased opinion. 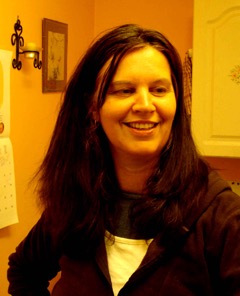 Kate Rigby was born near Liverpool and now lives in the south west of England.  She’s been writing for nearly forty years, with a few small successes along the way. She is a hybrid author, having been traditionally published, small press published and now indie published.
She realized her unhip credentials were mounting so she decided to write about it. Little Guide to Unhip was first published in 2010 and it has since been updated.
However, she’s not completely unhip. Her punk novel, Fall Of The Flamingo Circus was published by Allison & Busby (1990) and by Villard (American hardback 1990). Skrev Press published her novels Seaview Terrace (2003) Sucka!(2004) and Break Point (2006) and other shorter work has appeared in Skrev’s avant garde magazine Texts’ Bones.
Thalidomide Kid was published by Bewrite Books (2007).
She has had other short stories published and shortlisted including Hard Workers and Headboards, first published in The Diva Book of Short Stories and as part of the Dancing In The Dark erotic anthology, Pfoxmoor Publishing (2011)

She also received a Southern Arts bursary for her novel Where A Shadow Played (now re-Kindled as Did You Whisper Back?).

She has re-Kindled her backlist of previously published as well as most of her unpublished work including:

Or her occasional blog: