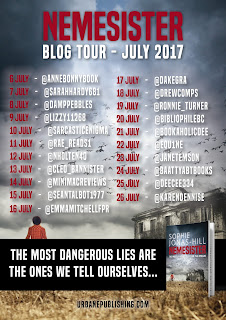 Thank you for joining me on the blog tour for Nemesister by Sophie Jonas-Hill today I'm sharing my review of this brilliant story. 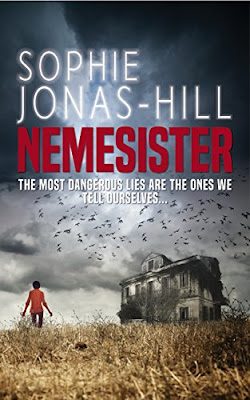 An American Gothic thriller of deception and obsession, slicked in sweat and set in the swamps of Louisiana.

It's a psychological mystery where the female protagonist stumbles into a deserted shack with no memory but a gun in her hand. There she meets an apparent stranger, Red, and the two find themselves isolated and under attack from unseen assailants.

Barricaded inside for a sweltering night, cabin fever sets in and brings her flashes of insight which might be memory or vision as the swamp sighs and moans around her.

Exploring in the dark she finds hidden keys that seem to reveal her identity and that of her mysterious host, but which are the more dangerous - the lies he's told her, or the ones she's told herself?

The description for Nemesister instantly grabbed my attention and I couldn't wait to discover the truth. So what did I think...

I loved the opening it really set the scene by having you wonder what is really happening and I was left eager to discover the truth. With bits and pieces slowly revealed that kept me quickly turning the pages. The mystery is a good one and the puzzle of who Margarita really is and what happened to her is brilliant. Even though she has lost her identity her character is strong and determined.

I guess it's safe to say that Nemesister took me by surprise and I loved the twists and turns that feature in the plot. I was definitely kept on my toes as the tension is slowly but surely ramped up as the book progresses. The whole story had that tense atmospheric feel mainly because of the location. You can't get more chilling than being stuck in the middle of nowhere with a complete stranger. Lies and secrets flow through Nemesister with the added flashbacks creating an unsettling and dark feeling throughout. As the reader at times I felt as off balance as Margarita did and it's Sophie Jonas-Hill's writing that completely sets the scene for this.

Filled with tension and flawed characters - Nemesister is an intriguing and dark story!

With thanks to Abby for the invite to join the tour & Urbane Publications for my copy. This is my honest and unbiased opinion. 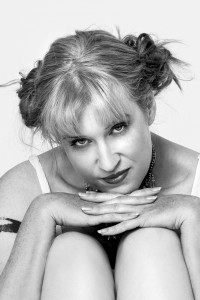 
I’ve always written and told stories, for as long as I can remember. My first self published work at the age of seven, fully illustrated in felt pen and crayon. I continued with a series of insightful ‘When I grow up I want to be an author’, essays, and an attempt at a ‘Bonk-buster’ series of supernatural thrillers written from a position of utter ignorance on all topics, until I was distracted by Art college. A never ending, or never finished, fantasy epic kept me going through my twenties, but it was motherhood in my thirties which concentrated my mind enough to actually finish a novel. It’s amazing what a bit of life experience and the sudden curtailing of your free time can do to concentrate the mind.
After that I began giving myself permission to take my writing seriously enough to spend time on it and actually listen to critiques. The writing festival in York proved invaluable, and time and disappointment got me to the point of producing something readable, which I was lucky enough to have read by Urbane publications.
If you make or write anything, the number one question you get asked is ‘where do you get your ideas from?’ In answer to that question, it’s an easy process which combines working on your craft every hour you can for as long as possible – hard graft – reading as much as you can of everyone else’s work – stealing – and inspiration, which is just one of those things that just happens. The inspiration for ‘Nemesister’ comes from a dark episode of family history, and a moment from a dream; an image of a man standing in the doorway of what I knew was an abandoned shack, which was gone as soon as it came and yet lingered, the way some dreams do.
Author Links
Twitter | Facebook