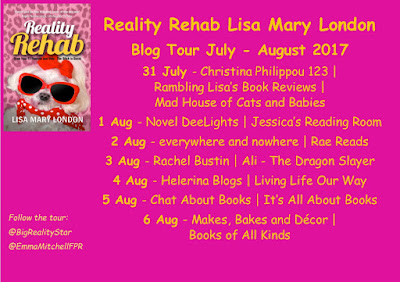 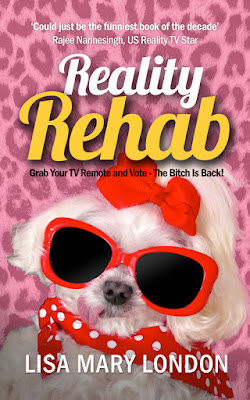 Faded TV star Gloria Grayson has hit rock bottom. Sacked from her starring role in a top soap, divorced from hell-raising actor 'Mad' Tommy Mack, and obese from binge eating, her days as Britain's sexiest blonde are well and truly over.
Gloria has gained 70 lbs when a paparazzi snaps unflattering photos and a cruel tabloid article relaunches her career. Instantly she and her fat, feisty dog Baby-Girl are booked for TV's Reality Rehab.
Gloria is locked up with an American psychotherapist, a rabble of D-list celebrities and umpteen cameras, then put on a starvation diet. But worse is to come, with the shock arrival of her alcoholic ex-husband.
Tears and tantrums ensue as the divorced couple's joint therapy sessions take over the show and ratings soar. The other celebrities are infuriated to be sidelined and Reality Rehab fast becomes the Tommy and Glo Show. But Gloria and Tommy are hiding explosive secrets from each other and 10 million viewers -

Reality is stranger than fiction!

With Reality TV shows popping up left right and centre this book is a fun and cheeky look into this often outlandish and extreme world. It seems as though even now after numerous reality shows a large percentage of the population is obsessed by celebrities and their lives. In the past I have been just as guilty of watching these shows although as I have got older I don't seem to be as interested. Well maybe I do still watch the odd one! So when I saw Reality Rehab and read the description I knew I had to read it.

Gloria is brilliant she is funny and completely over the top after a lifetime of being adored it is just so difficult for her to accept reality. Her one liners were perfect and I especially loved the line where after seeing a less than flattering picture in a newspaper she said she was so incensed she ate an entire Black Forest Gateau! She was constantly making me smile and I couldn't help but root for her even with her flaws.

The whole story is a delight to read with so many laugh out loud moments especially any scene with Tommy. He is pretty hysterical at times and just like Gloria has some fabulous one liners put it this way I didn't dare drink or eat whilst reading as I would have surely ended up wearing it! Reading this story just felt like getting a behind the scenes experience, warts and all! Lisa Mary London has written characters who just seemed to come to life before my very eyes, they are wonderfully over the top and so very entertaining. A special mention has to go to Baby-Girl who is brilliant and I loved her attitude to Tommy.

With newspaper articles mixed in with the story which I thought was a fun touch especially the readers comments. If you want a laugh out loud, snort inducing read then Reality Rehab is a must. The story moves pretty quickly and it's so easy to get dragged into the celebrity lifestyle of perfection and determination to succeed.

If Reality Rehab was a TV show I'm pretty sure I would be hooked!

With thanks to Emma for my copy. This is my honest and unbiased opinion. 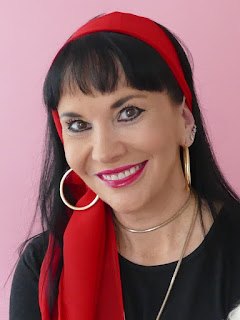 Lisa Mary London went from a reporter on a sleepy Gloucestershire newspaper to become celebrity producer on some of Britain’s best-loved TV shows. Her credits include: An Audience With Ken Dodd, A BAFTA Tribute To Julie Walters, The British Comedy Awards and I’m A Celebrity… Get Me Out Of Here!
‘There’s never a dull moment when you’re working with the stars’, says Lisa: ‘One minute you’re sipping champagne with Pierce Brosnan, the next you’re standing in the ladies minding Barbara Windsor’s handbag’.
Her new novel Reality Rehab is based on her real life, behind the screen experiences in television:
‘I’ve met many old-school stars like Gloria who curse the rise of reality TV and think the cast of TOWIE should be stacking shelves at Tesco, not walking the red carpet’.
‘Gloria’s a glorious, garrulous anti-heroine with bags of fatitude.  A heady mix of Diana Dors, Miss Piggy and Boadicea, Gloria puts the real in reality TV!’
​
A journalist by profession, Lisa has written for the Daily Mail and was briefly a News of the World reporter but made her excuses and left before anyone was imprisoned for phone hacking. 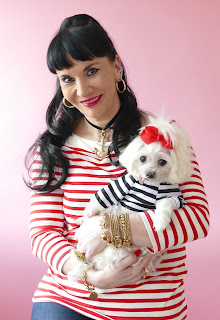