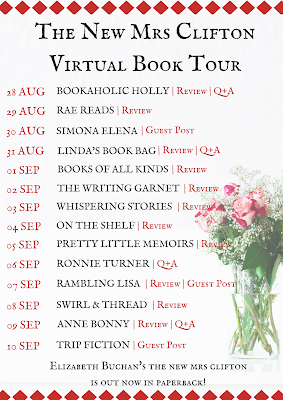 I'm delighted to be taking part in the blog tour for The New Mrs Clifton by Elizabeth Buchan. Today I will be sharing my review but first of all let's take a look at the description for the book... 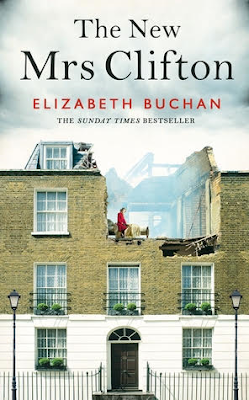 'Wrapped in the roots of the sycamore was a skeleton; the remains of a woman, between twenty-five and thirty. She had carried a child . . .'

At the close of the Second World War, Intelligence Officer Gus Clifton returns to London. On his arm is Krista, the German wife he married secretly in Berlin. For his sisters, this broken woman is nothing more than the enemy. For Nella, Gus's loyal fiancée, it is a terrible betrayal. These three friends wonder what hold Krista has over decent, honourable Gus. And, they ask themselves, how far will they have to go to permanently get her out of their home, their future, their England?

The opening chapter sets the scene for an intriguing mystery that I have to say managed to capture my attention and kept me turning the pages. Elizabeth Buchan provides vivid descriptions in her writing that easily pulled me into the story. Details aren't sugar coated and there is a certain matter of fact way that the characters discuss their pasts especially Krista. They are survivors and it was easy to feel and understand their way of getting through their experiences the more I got to know them. It is emotional and haunting to hear of Krista's life during the war and in fact all of the characters exposure to war. After enduring horrible events Krista is introduced into a different way of life here in England creating a volatile mix that is always simmering and threatening to overflow into this new life.

There are secrets and lies galore that make this story so interesting to read they were placed at just the right time to keep me turning the pages to discover the truth. There is also a very delicate and subtle tension running through the story especially as the reader knows that something terrible will happen. It's the type of story that left me thinking about the characters days after I had finished the book. They were all intriguing and complex in their own right as they try to start afresh after the war has ended. The story is written in a beautifully descriptive way and I felt an emotional pull to the story too. Even though some of the characters weren't fully sympathetic for the whole duration of the story I still became attached to them along with their worries and fears for the future.

The pacing is good and I liked the way that the characters had chance to develop without being rushed. I'm a fan of historical fiction so the history aspect was perfect especially as it was set at the close of the Second World War. This book shows people trying to pick themselves up and start again in any way they can.

The New Mrs Clifton is a compelling story that is alive with drama, lies and secrets.

With thanks to Sian Devine and Elizabeth Buchan for my copy. This is my honest and unbiased opinion. 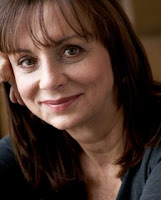 Elizabeth spent her childhood moving home every three years – including living for brief periods in Egypt and Nigeria before moving to Guildford, York and Edinburgh.

After graduating from the University of Kent at Canterbury with a double honours degree in English and History, she began her career as a blurb writer at Penguin Books. This was a job which required the hide of a rhinoceros, a nimble mind and the – occasional – box of tissues. People tend to shout at blurb writers but they are resourceful creatures which she and the team proved by continuing to produce a stream of copy for back jackets through thick and thin. Looking back, it was a golden era. Not many people are paid to spend their time reading through the treasury which is Penguin Books and there was no better education. Later, after having married and producing two children, she moved on to become a fiction editor at Random House before leaving to write full time which was something she had always planned to do since childhood – when she was frequently caught reading under the bedclothes with a torch after being put to bed which gave both books and reading a deliciously subversive tinge.

It was not an easy decision to take the gamble but she has never regretted it. As a writer, she has travelled all over the world and one of the many pleasures of the book tour has been to meet readers of all ages and to share with them a mutual passion for books and reading. She is in touch on line with many of them.

Elizabeth Buchan’s short stories are broadcast on BBC Radio 4 and published in magazines. She reviews for the Sunday Times (UK) and has chaired the Betty Trask and Desmond Elliott literary prizes, and also been a judge for the Whitbread (now Costa) awards. She is a patron of the Guildford Book Festival and a past Chairman of the Romantic Novelists’ Association.