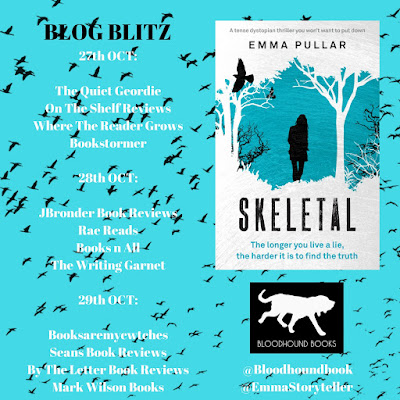 I'm delighted to be one of the stops on the blog blitz for Skeletal by Emma Pullar. Today I will be sharing my review but first of all let's take a look at the description for the book... 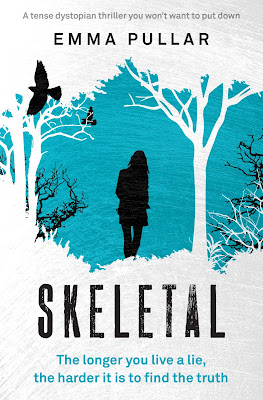 Gale City is the last city in the world and under the strict control of the illusive Centrals.

When females reach adulthood, they’re given the chance to compete at Showcase for the honour of becoming surrogates for the Morbihan - a highly intelligent, obese race of people, unable to procreate naturally. All the other girls are excited to become hosts, all except Megan Skyla.

Convinced there’s more to life, Skyla teams up with an unlikely friend and they go in search of a cure for the Morbihan condition. Things don’t go to plan and their journey becomes a harrowing quest fraught with danger and deceit.

How can Skyla discover the truth when everything she’s been told is a lie? Can anyone in Gale City ever really be free?

Skyla is about to discover that freedom has a price and she’s going have the fight to survive.

Skeletal is a disturbing vision of the future and a literary thriller unlike any other.

I really enjoy reading a dystopian story every so often so when I saw the description for Skeletal I just had to read it. Emma Pullar writes in a brilliantly descriptive way that really sets the scene and draws you in. Skeletal has such an interesting premise and after reading a couple of chapters I couldn't wait to find out even more.

Skyla is an intriguing character she knows her own mind and I loved that. She doesn't want to follow the crowd and the rules that govern them even though she has to. Skyla's world is bleak and it's down to the fact she is a Skel and you can feel that desperation coming from the pages. Especially at the Showcase where everyone is hoping to be picked. I enjoyed seeing the tentative friendship between Skyla and Bunce play out. There is also dark humour within the book mainly coming from Skyla's observations but it made this book even more entertaining. It feels as if Skyla is alone in her thinking making her character even more isolated in this upside down society. Where there is such a divide as the Morbs live in luxury and comfort but the Skel are left to starve.

The pacing of the story is pretty good and I really enjoyed the insights into both the Skels and Morbs lifestyles. There were a few times where I cringed and had to try hard not to think about what had just happened. These parts just added to the overall dark and desperate situation that Skyla and her friends find themselves in. There were a few surprises in Skeletal that really helped to keep me on my toes. I don't want to go into too much detail regarding the plot as it really is worth reading yourself.

A dark and intriguing look into a desperate future with engaging characters that will have you rooting for them every step of the way.

With thanks to Sarah at Bloodhound Books for my copy and invite to join the tour. This is my honest and unbiased opinion.

Emma Pullar is a writer of dark fiction and children’s books. Her picture book, Curly from Shirley, went to number four on the national bestseller list and was named best opening lines by NZ Post. You can read her SJV Award shortlisted horror story, London’s Crawling, in the Dark Minds charity collection and her dystopian sci-fi story, Old Trees Don’t Bend, in The Anthropocene Chronicles. Emma has also written three shortlisted stories for Create50 which are awaiting the winner announcement. Her debut novel SKELETAL published by Bloodhound Books is due for release 27th October 2017.