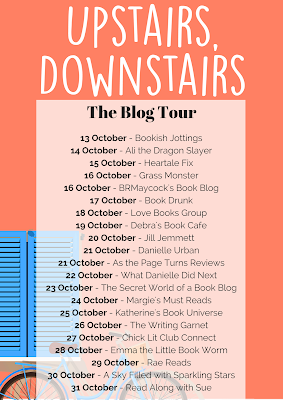 I'm delighted to be one of the stops on the blog tour for Upstairs, Downstairs by Olivia Hart. Today I will be sharing my review but first of all let's take a look at the description for the book... 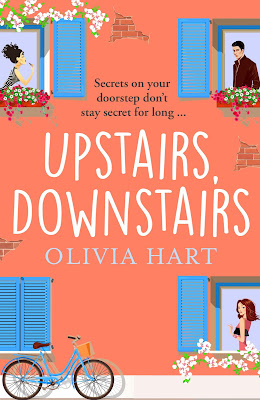 Secrets on your doorstep don’t stay secret for long… A romantic comedy perfect for fans of Debbie Johnson and Holly Martin.

When Daniel Bracci – a musician at Rome’s Opera Theatre arrives at his new apartment, he is surprised by the warm welcome he receives from his neighbours. Giovanna however, is more preoccupied with introducing him to her daughter Anita. But what she doesn’t know is that for the last two years, Anita has been secretly seeing someone else.

When Anita is introduced to the new tenant, she has the shock of her life – Daniele was Anita’s first love at high school. Can she come to terms with the terrible way things ended between them?

Anita isn't the only one with something to hide… and none of these secrets go unnoticed by Pina, the apartment gossip who writes everything down in her secret diary...

To be honest when I read the description for this book I was expecting one thing and ended up being surprised. I was expecting to just follow Anita throughout the book. However there is a selection of characters that are pretty quirky in their own right. They all live in the apartment block and all have their own secrets that are waiting to be revealed. I didn't necessarily warm up to Anita straight away but she did grow on me as the story progresses. She ends up confused after bumping into Daniel who is a definite blast from the past. There are a few characters so it did take me a couple of chapters to get who everyone was straight in my head. I think because of this there could have even been an extra book following the other characters. Due to this I didn't feel as if I got to know Anita as much as I could have. However this is only a minor thing as the overall fun and homely environment of the apartment block still manages to shine through. There is plenty of drama packed into the story that provided plenty of entertainment for the reader. Even though some of the characters reactions could be over the top it had it's fun moments definitely helped by the complicated lives of Anita and her friends.

Upstairs, Downstairs moves pretty quickly and it didn't take me long to read at all. I enjoyed the extracts from Pina's diary she was after all the ultimate nosy neighbour. Overall this story is a light hearted read so if you are in need of a distraction from your day this could be perfect.

With thanks to Melanie at Aria Fiction for my copy and invite to join the tour. This is my honest and unbiased opinion.

Olivia Hart is a collective group of authors who met five years ago on a writing course and then could no longer do without each other's company. They decided to write a novel that would bind them forever.