I received an ARC from the publisher 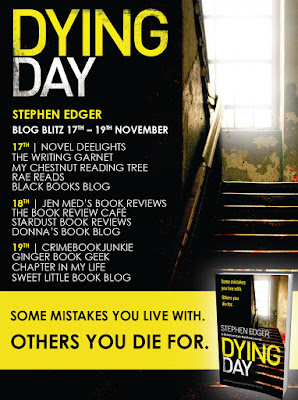 I'm delighted to be one of the stops on the blog blitz for Dying Day by Stephen Edger today I will be sharing my review. First of all let's take a look at the description for the book... 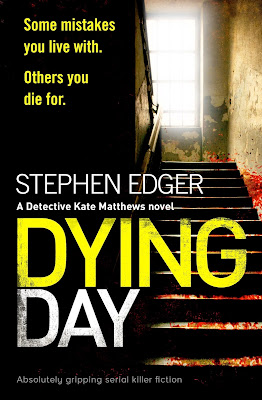 Some mistakes you live with. Others you die for…


When the body of a young woman is found in the boot of an abandoned car near the Southampton Docks, Detective Kate Matthews is ordered to stay well away from the scene.

Exactly a year ago, Amy, a junior detective on Kate’s team, was murdered when she was sent undercover to catch a serial killer targeting young girls. Kate never forgave herself for letting the killer slip through her fingers and her team are worried this coincidence might push her over the edge...


When another girl’s body is uncovered days later with similar bruising around the neck, Kate launches an investigation of her own, determined to connect new evidence to the old to catch this monster before more innocent lives are taken…

Mysterious sympathy cards sent to the victims' families finally lead Kate to the twisted individual from her past. But if she’s found the killer, why does the body count keep rising?

After reading the first book in the Detective Kate Matthews series I was looking forward to the next case. I really enjoyed the fact that Kate has flaws and on occasion makes mistakes as she gets personally invested in her cases making her a more interesting character for it.

This book has an intriguing set of murders and because of the death of Amy a year earlier Kate decides to go all out to finally catch her killer. You can feel Kate's guilt that she feels in connection to Amy's death which makes her even more determined. Kate's behaviour can be erratic so I guess this can make her into a marmite type character. However I always appreciate the flaws that characters have it makes them feel a little more realistic after all no one is perfect.

Dying Day isn't a story that moves at break neck speed it's more simmering with attention to detail that helps to build a strong story. Something that the reader can digest and start to come up with their own theories. Which is what I was doing albeit not very well. I loved the added mystery of not only the current cases but the past cases too. I always try to be as vague as possible regarding the plot as I would hate to ruin the story but it's safe to say that this is definitely a case that gets under Kate's skin and as such I also felt that need to solve the crimes too.

There were plenty of twisty moments along with a few surprises that kept me on my toes wondering which way the story would go next. The ending had me racing through the pages trying to read as fast as I could. I'm looking forward to reading the next in the series and finding out what Kate's next case will be!

With thanks to Noelle at Bookouture for the invite to join the tour and for my copy. This  is my honest and unbiased opinion. 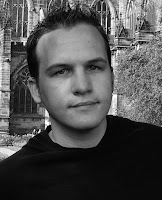 Stephen Edger is a British crime writer, who has been writing since 2010. In that time he has written and published eleven novels, and five short stories. He writes mysteries and thrillers focused on crime.

Stephen was born in the north-east of England, grew up in London, but has lived in Southampton since attending university in the year 2000. Stephen works in the financial industry, and uses his insider knowledge to create the plots of his books. He also has a law degree, which gives him a good understanding of the inner workings of the UK justice system.