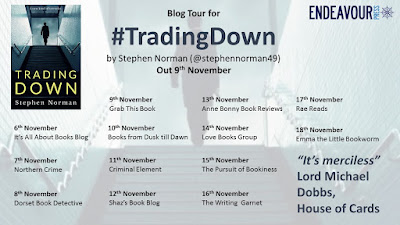 I'm delighted to be taking part in the blog tour for Trading Down by Stephen Norman. Today I will be sharing an extract with you but first of all let's take a look at the description for the book... 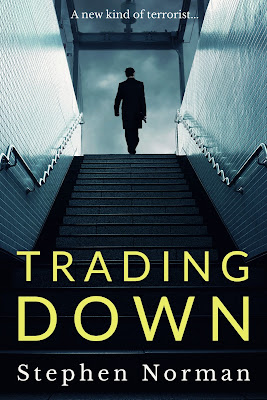 London – Chris Peters loves his work: the excitement of the trading floor, the impossible deadlines and the constant challenge of the superfast computers in his care. But the dream turns sour as mysterious meltdowns begin to hit datacentres across the grid and a true banking collapse threatens. Desperately trying to hold his marriage together as systems crash and traders turn on him, Chris must uncover the sinister truth before chaos is unleashed…

Yemen – When Zahra’s father fails to return from a work trip to Dubai, she is sure there is a simple explanation… until gruesome warnings arrive on the doorstep. As the threats become more violent Zahra’s family are thrown into a desperate race to pay off their father’s captors. But how far will her family go to meet the abductors’ demands?

Noise. Had his alarm gone off? No. Chris Peters lay still in bed, confused. Outside he could hear a songthrush, greeting the new day. His brain snapped into work mode. It was Friday. Triple Witching. Had they fixed Chopstix in time? What about the EOS batch?
The noise again. It was his Blackberry, ringing and vibrating at the same time. Bloody hell, must be Dave Carstairs with a production problem. He picked it up and stared at the screen, confused. A call from BUSINESS CONTINUITY – LONDON.
Huh? What?
More noise. The phone in his study was ringing. Then the old phone downstairs. The whole world was ringing and he was suddenly afraid. He pressed the ANSWER button on his Blackberry and it spoke to him:
…THIS IS A MESSAGE FOR CHRIS PETERS. THIS IS NOT A DRILL. THERE HAS BEEN A SIGNIFICANT INCIDENT IN THE HAMILTON DATACENTRE. DIAL INTO YOUR DISASTER RECOVERY BRIDGE IMMEDIATELY. THIS IS NOT A DRILL…
And all the while, the other phones kept ringing, loud enough to wake the dead.
Chris sat naked, hunched over at the top of his stairs, and dialled into the Technology DR bridge. It was chaos. Everyone had a question. No one had answers. The incident manager was struggling to corral the troops.
Chris put the bridge on hold and called John Uzgalis.
“John, what’s going on?”
“I called Mannie Seibowicz, he’s the TIS guy who runs the NOC in Hamilton,” said Uzgalis. “He just arrived on site, looks like a cooling problem in Laurel. Could be worse, we got nothing but dev and test kit in there.”
“Me too. Great news. OK, ciao, gonna put some clothes on.”
Chris threw on a pair of old corduroys and a lumberjack shirt. He opened his front door and sat on the steps outside. He wanted the phone on speaker but he didn’t want to disturb Olivia. It was a bright morning with scattered clouds. With luck, this incident would be deemed harmless and in half an hour he would be drinking tea with Olivia – swiftly followed by baby making.
As he dialled back into the bridge, the sun slipped behind low clouds and the street darkened, as if to warn him.
*
Hamilton datacentre: 00:47 EST

Mannie was hunched over the Polycom, ready to give his update.
“Well, thank God it is only Laurel,” said Luis, glancing at the clock on the wall. It said 00:47. This was a moment he would never forget. He would bore his family with this moment for years to come. But he didn’t know that, not quite yet.
“Why nobody cares about Laurel?” said John. “It’s full and the Hardy hall’s half empty.”
“It’s not just how many computers,” said Luis, “it’s what they do. There’s only developer and test kit in Laurel. Plus Asset Management - no-one cares about them. Hardy Hall has the mainframe. We lose that, all the US branches will be shut down. Plus Canada, Mexico, Brazil. No banking, no payments, shit, no cash machines. Global Markets won’t be trading. On a Triple Witching day. If this was Hardy melting down, we’d be on the front page of the Wall Street Journal tomorrow.”
“Mannie? Mannie?” This was John, watching the screens with puppy-like devotion.
“Not now, John, I gotta give my update.”
“But look at these messages: 1108 Excess temperature alert. There’s six of them, all from different machines.”
“So what?” said Mannie, distracted. “We’ve seen hundreds of them.”
“Yes, but these servers are in the other hall. Hardy. The big hall.”
“They can’t be. Hardy is on different chillers.” That was Frank.
“No, John’s right,” said Luis, “those boxes are in Hardy.”
“It’s impossible,” said Frank, “I’m telling you, there’s different chillers for the Hardy Hall, different electrics… ain’t no connection.”
“Oh shit! There’s more of them… look at that,” said John. “Those are Windows servers in the same aisle. Houston, we got a problem.”
Almost in sync, Mannie’s cellphone and the handset on the table started ringing. Then Karen’s. It was Paul Carpenter in Manhattan, and the NOC in London, and in Chennai. The whole world was calling, all with the same question: What the fuck is going on in Aisle E, Hardy Hall, Hamilton Datacentre, NJ 10392?

Trading Down by Stephen Norman is on Amazon pre-order for Kindle delivery on 9th November, 2017.

Stephen Norman spent 20 years at the forefront of investment banking IT, facing industry turbulence, from the rise and fall of the dotcoms, the destruction of 911 and the banking collapse of 2008. He has worked in financial centres across the world – from London and New York, to Hong Kong and Tokyo – and has fulfilled a range of high powered roles including Chief Technology Officer at Merrill Lynch and an unusually long 7 year stint as CIO of RBS Global Markets. In 2012, he left the world of finance to focus on his writing.Trading Down is Stephen’s first novel.