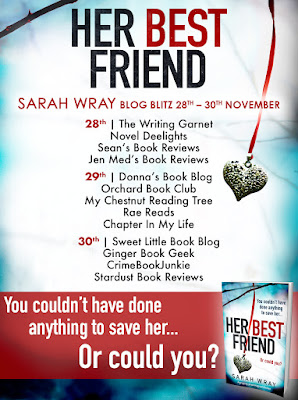 I'm delighted to be one of the stops on the blog blitz for Her Best Friend by Sarah Wray. With thanks to Noelle for the invite to join the tour. Today I will be sharing my review but first of all let's take a look at the description for the book... 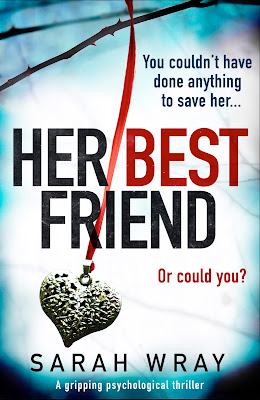 You couldn’t have done anything to save her.

Sylvie Armstrong has been running from her past for twenty years – until her mother’s death forces her to return to her home town, along with her newborn daughter.


Overwhelmed by grief in her childhood home, Sylvie tries to block out the memories that surround her – but then someone leaves a gift on her doorstep: a gold necklace with a heart-shaped locket.


This locket belonged to Sylvie’s best friend, Victoria Preston – and she was wearing it the night she died. Now it’s back in Sylvie’s life...and it soon becomes clear that somebody knows what really happened to Victoria.

Sylvie has to know the truth. But is she in terrible danger?

A gripping, page-turning psychological thriller with a final twist that will leave you open-mouthed. Fans of Sophie Hannah, The Girl on the Train and Gone Girl will be hooked.

It was very easy to become involved in the story, Sarah Wray wrote Her Best Friend in such a way that in no time at all I was wrapped up in Sylvie's life. It was pretty addictive reading and I couldn't wait to discover the truth mainly because I didn't know who to trust or what information to believe.

It's a deep and spiraling story that reveals itself slowly but surely with bits and pieces from the past surfacing as the reader learns more about Sylvie and Victoria. I loved the two timelines in the story as we get to see the present day when Sylvie returns home after quite some time away. Then we also get to see Sylvie and Victoria's friendship back in 1995. The story is shown from Sylvie's perspective and then on occasion we see Sam's view point. Even though I enjoyed hearing Sylvie's story it was also a good contrast to see Sam's point of view as he looks into the cold case of Victoria's murder. I thought it worked well as we have the emotional connection with Sylvie to the more analytical point of view with Sam.

The mystery is quite intense at times and you can feel the pressure that Sylvie is under being back home along with trying to deal with the memories that this stirs up.

It will grab hold of you until the very last page and what an ending it is!

With thanks to Noelle at Bookouture for the invite to join the tour and for my copy. This is my honest and unbiased opinion. 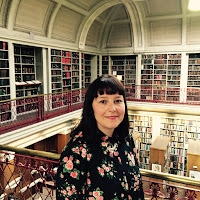 Sarah Wray is originally from Yorkshire but now lives in Newcastle-upon-Tyne where she works as a technology writer and editor. She won a Northern Writers' Award (Arvon Award) in 2015 for an early version of her first novel.