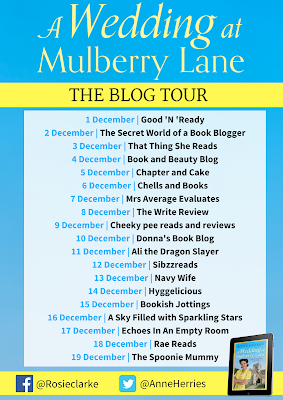 Thank you for stopping by, I'm delighted to be sharing an extract as part of the blog tour for A Wedding at Mulberry Lane by Rosie Clarke. First of all let's take a look at the description for the book... 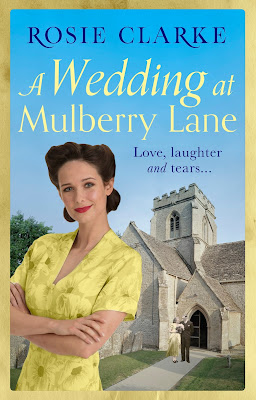 Love, marriage, birth, death and betrayal in the East End of London make up life in Mulberry Lane. Perfect for fans of Nadine Dorries, Cathy Sharp and Donna Douglas.

Maureen Jackson knew life as a trainee nurse wouldn't be easy, but she didn't expect her hospital to be badly bombed on her first shift. Plus Maureen still has her family and friends in Mulberry Lane to keep her busy – she's needed as much there as she is by her patients.

Running the pub on the corner of Mulberry Lane, Peggy Ashley is used to taking in all sorts of waifs and strays. But the arrival of a dashing American captain has got tongues wagging about Mulberry Lane's favourite landlady...

Janet Ashley's husband is back from the frontline. Which is more than so many of the wives of Mulberry Lane. But her beloved Mike is a completely different man from the one she fell in love with – and what's more he doesn't remember her, or their young daughter. How do you cope when your darling husband is a virtual stranger?

As WW2 continues around them, the women of Mulberry Lane know that community spirit and friendship is the key to surviving the Blitz.

Rosie’s previous series, The Workshop Girls is out now: http://amzn.to/2nwLwHT

Leaving her daughter to look after her baby, Peggy went through to the bar, which smelled of polish because Nellie had been hard at work rubbing the wooden surface of the bar and the little oak tables set at intervals about the large room. The Pig & Whistle was an old-fashioned pub in style, built more than a hundred years earlier, with dark oak beams holding a rail above the bar from which Peggy had hung horses’ brasses that gleamed in the lights. The shelves behind were also made of oak that had gone dark with age, but Peggy had persuaded Laurence to have mirrors set behind them so that the bottles and glasses were reflected and it made the bar seem even bigger.

‘You’ve got this looking lovely, Nellie,’ Peggy said. ‘If you put the kettle on I’ll come through for a drink once Anne has her coat off…’ She broke off as the door opened with a ping and right on cue their first customer of the day arrived. He was a travelling salesman with flat feet, which he made much of because it was the reason the army had refused him. ‘Good morning, Mr Symonds, how are you?’

‘Very cold and my feet are giving me hell,’ he said. ‘Have you a nip of whisky for me, Peggy? Just to keep the chill off my chest…’

‘I’ll ’ave a sit-down and a cuppa,’ Nellie said cheerfully. ‘Then I’ll go up and give the bedrooms a clean…’

‘Yes, please.’ Peggy was thankful for her cheerful helper as she served the customer with a measure of whisky from under the bar. Because it was only so far the stock Laurie had so providentially stocked in the cellars before the war would stretch, Peggy had worked out that the regulars who always came to her for whisky should have their own bottles, which she kept out of sight. For the moment, she was still able to provide a drink of some sort even for casual visitors, but as the shortages began to bite harder, she’d known she must make sure that her regular customers didn’t go without. ‘Only a third of the bottle left, sir.’

‘Can you put another one by for me?’ Mr Symonds asked. ‘I’d be happy to pay up front if you wish?’

‘You know I don’t ask for that,’ Peggy said. ‘I’ll see what I can do, but it depends whether I can get more deliveries. They’re very hit and miss…’

Peggy didn’t want to reveal that there was still quite a stack of boxes stored in the pub’s cellars. She hadn’t even known they were there until Pip had shown her the secret hoard Laurie had put by without telling her –  one of his secrets, like the money in the post office bankbook that he’d told her about at Christmas, just in case he didn’t come back.

Once, Peggy had considered they were close, and she’d certainly been head over heels in love with Laurie when they married, because he’d been handsome and fun to be with. He was still attractive, but the laughter had come less often over the years, Laurie seeming to touch her only when he wanted sex. The spontaneous cuddles and kisses had been missing for years, and without realising it, Peggy had allowed the friendship of her customers and neighbours to fill the empty spaces in her heart.
‘You’re the best, Peggy Ashley,’ her customer said and winked. ‘Give me one of those scones, will you?’

‘I’m afraid there’s only margarine today,’ Peggy said. ‘You can have jam as well – but most people just like them plain because they’ve got an almond flavour.’

‘I’ll have a little marge then,’ he sighed. ‘This rotten old war – it’s a rum thing when we can’t even get a bit of butter on a scone…’

He took his drink and the small plate off to a table in the corner and sat down to open his briefcase. Anne entered from the kitchen and Peggy nodded to her.

‘I wasn’t sure if you would be in today…’

‘I’m free for the next week or so,’ Anne told her, tucking a stray wisp of hair back into her severe style. ‘The school board is trying to locate some children who ran away from their billets in the country and came home. When they’re found, I’ve got to take them back and help settle them into their new schools.’

‘It’s a bit of an upheaval for you,’ Peggy’s ready sympathy came to the fore as she looked at her friend. Anne was attractive, her light brown hair drawn back today into a swirl at the back of her head, but she had beautiful soft grey eyes and could have been really lovely had she taken the trouble to make more of herself. Peggy often thought Anne tried to look plain in her dull tweed skirts and hand-knitted jumpers, as if she had made up her mind to be an old maid and didn’t want any offers from men; perhaps because she’d had an unhappy affair once before. ‘Why don’t they give you a proper settled job?’

‘It’s because they need supply teachers at a moment’s notice. We’ve lost so many schools, either because they’ve been taken over by the War Office or they’ve been bombed. We’ve had to set up temporary schools where we can, and a lot of the young teachers are leaving to join the women’s forces…’

‘You thought of it at one time, didn’t you?’

‘Yes, when I was feeling miserable; that’s why I’ve done some voluntary ambulance work, but I’m glad I stuck to my teaching – besides, you get moved around even more in the services. Maureen has just been told they’re sending her down to Portsmouth…’

‘She won’t be happy about that now Rory has been transferred to a convalescent home nearer London.’ Peggy shook her head over the news. For years Maureen had been virtually a prisoner in her father’s little shop at the other end of Mulberry Lane, but Mr Jackson had suddenly remarried and Maureen had walked out on him and joined the Women’s Volunteer Service, opting to train as a nursing assistant. The man she loved had been wounded in the war and sent to a specialist burns hospital, but recently he’d been transferred back to London. 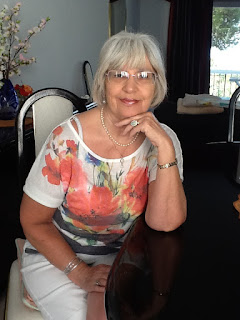 Rosie Clarke was born in Swindon, but moved to Ely in Cambridgeshire at the age of nine. She started writing in 1976, combining this with helping her husband run his antiques shop. In 2004, Rosie was the well-deserved winner of the RNA Romance Award and the Betty Neels Trophy. Rosie also writes as Anne Herries and Cathy Sharp. Find out more at her website: www.rosieclarke.co.uk