Thank you for joining me today I have an extract & review of Jungle Rock by Caroline James. Then you can enter a lovely giveaway!

First of all though let's take a look at the book... 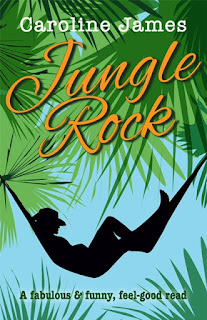 Romantic comedy author, Caroline James has written an entertaining novella with a Christmas feel Set in the Australian jungle, the book has been described as ‘entertaining and funny, a real feel-good read’ and fans of, I’m A Celebrity, Get Me out of Here are sure to enjoy it.

Handsome young chef, Zach Docherty is feeling the heat. Following an exposé in a national newspaper his fiancée Poppy Dunlop, has broken their engagement. Heartbroken at the thought of life without Poppy, Zach drowns his sorrows and when his agent suggests that Zach becomes a contestant in a reality TV show, Jungle Survival, he reluctantly agrees. Plunged deep into the jungle, with a bizarre mix of talent and trials, Zach meets glamour model, Cleo Petra, and the cameras go crazy. Will Zach survive and be crowned Jungle King? Or will his latest exploits push Poppy further away...

“He’s doing what?” Hattie said. She had a mouthful of shortbread and a mug of coffee in her hand and stopped in her tracks as she watched Jo stare at her mobile phone.

“Zach’s going into the jungle. He’s a contestant on Jungle Survival.”

“Oh my.” Hattie smiled and wiped a spray of crumbs off her chest.

“He’s at the airport with Bob; they’re about to board a plane.”

“Well I never.” Hattie put her mug on the desk and stared at her friend. “How do you feel about that?”

Cradling mugs of coffee, laced with a good slug of brandy, Jo and Hattie sat in the conservatory and looked out at the garden beyond.

“It doesn’t seem five minutes since he was a little boy running all over this lawn with his brother,” Jo said as she stared thoughtfully across the neatly manicured grass.

“And now he’s running off to Australia.”

In the distance, a group of guests appeared from the meadow, where a clairvoyance course was being run in an old gypsy caravan. Originally horse-drawn, the caravan had been John’s pride and joy, brightly painted with little wooden steps. It was a perfect setting for an intimate group. Boomerville hosted many courses for residents to enjoy and it was Jo’s hope that a stay at the hotel would inspire middle-aged boomers and set them up with new and inspiring skills to use in their later years.

“Another successful event,” Hattie said as she watched the beatific expressions of the participants as they drifted down the garden, confident that the spirits of their dead granny and Rover, the family pet, were beside them, whispering and woofing encouraging words from beyond.

“I wish I could see into Zach’s future,” Jo replied. “I hope he’s not making a terrible mistake.”

“Well, if he is, he’s picked the right place to make it. That show’s watched by millions. Perhaps we should run something similar here?” Hattie closed her eyes and began to plan out a jungle camp, set in the meadow.

“The old ‘uns would love it! Prancing about like Bear Grylls, cooking over an open fire, sleeping under the stars. It has ‘winner’ all over it.”

“It has mass suicide all over it,” Jo replied.

“Think of the low overheads. We could bring Wonder Boy in to teach them how to skin a rabbit or two, a bit of camp-fire bonhomie and all that stuff.”

“Hattie, will you please be serious. My son is currently on his way to the other side of the world, where he’ll be exposed to any amount of danger; he’s emotionally vulnerable and I’m worried about him.”

Hattie sat up and opened her eyes.

“Oh, get a grip,” she said. “Can you imagine what he’s getting paid for this stint? How can he possibly go wrong? They’ll have him stripped down to his six-pack before the opening credits have run. He won’t even need to open his mouth and the phone lines will be pulsating as fast as every female viewer’s heart. Your Zach has made his finest career move yet.” Hattie reached for Jo’s empty mug. “Get that grumpy expression off yer face and let’s send him good luck wishes for his arrival in Aus.” She stood and glanced at the group in the garden. “Perhaps we can get that lot to send him a mystical sign...”

As Jo watched Hattie walk away, she felt cross. She knew that Hattie was probably right but Jo had a niggling feeling that Zach’s trip wasn’t going to run as smoothly or as successfully as everyone expected. A mother had an instinct about her offspring, but in this case, Jo hoped that her instincts would be proved wrong.

Available as an E-book and paperback 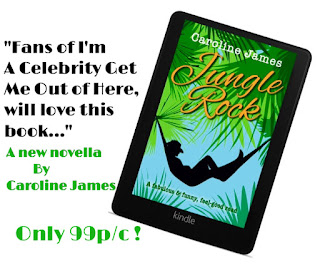 In the summer I read Coffee, Tea, The Caribbean & Me by Caroline James in that story we briefly meet Zach and Poppy so I was looking forward to carrying on reading their story in Jungle Rock.

I loved the fun premise for this story and I really hoped that Poppy and Zach would get their happy ending. Even though Jungle Rock is a novella the story didn't feel rushed and everything came together brilliantly. I enjoyed the parts in the jungle with Zach’s fellow campmates. Although at times I thought it was kind of a shame it wasn't a full story so I could read more about them.

When Poppy went to the Epcot Food Festival I had to smile. The last time I was in Florida we went to the World Showcase at Epcot and ate at some of the stalls during the Food Festival. I really liked Poppy and felt for her as she struggled to move on from Zach.

All of the characters are well written but Jo and Hattie are a delight and it was lovely to catch up with them in this book. Even though Jungle Rock has characters from previous books by Caroline James it can still be read as a standalone.

Jungle Rock is an enjoyable and heart warming story!

Thank you to Caroline James and Brook Cottage Books for my copy. This is my honest and unbiased opinion. 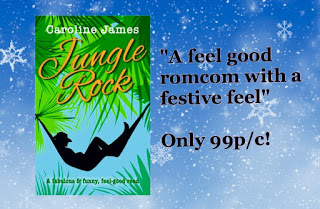 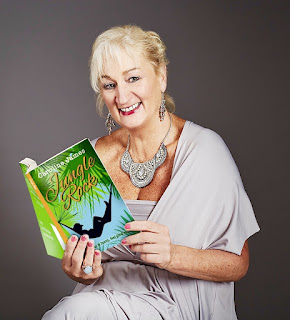 Caroline’s debut novel, Coffee Tea The Gypsy & Me shot to #3 on Amazon and was E-book of the Week in The Sun newspaper. Her second novel, So, You Think You're A Celebrity… Chef? has been described as wickedly funny: 'AbFab meets MasterChef in a Soap…' Coffee Tea The Caribbean & Me, an Amazon best-seller, was a Top Ten Finalist at The Write Stuff, London Book Fair 2015 and the judge’s comments included: Caroline is a natural story-teller with a gift for humour in her writing.” Her next novel, Boomerville will be published spring 2017.

Caroline has owned and run many catering related businesses and cookery is a passion alongside her writing, combining the two with her love of the hospitality industry and romantic fiction. As a media agent, Caroline represented many well-known celebrity chefs and her TV script, So, You Think You’re A Celebrity Chef? was runner up at the Winchester Writers Festival 2016.

She has published short stories and is a member of the Romantic Novelist’s Association. Caroline writes articles on food and celebrity based interviews and is Feature Editor for an online lifestyle magazine. She is a founder member of The Cheshirati and is available for inspiring and entertaining talks on anything related to the hospitality and publishing industry.

a Rafflecopter giveaway
at December 11, 2016