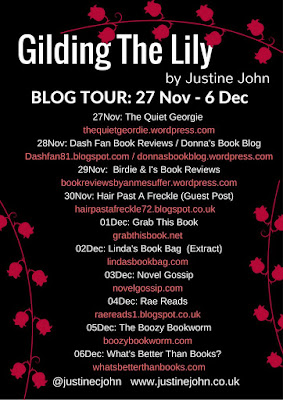 Thank you for joining me for my stop on the blog tour for Gilding The Lily by Justine John. Today I'm delighted to be sharing my review but first of all let's take a look at the description for the book... 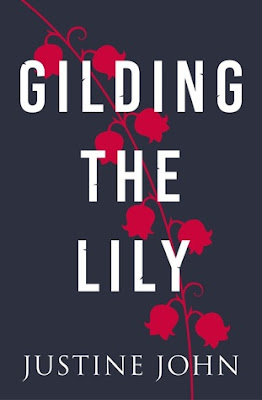 A gripping mystery of jealousy, murder and lies.An invitation to her estranged, wealthy father’s surprise 75th birthday party in New York sees London-based Amelia and her husband, Jack, set off across the pond to meet a whole new world of family politics.Amelia, now a successful businesswoman, has guiltily never liked her father’s women, but does her upmost to give his new socialite partner, Evelyn, the benefit of the doubt. Wouldn’t it be nice if they could just all get along? But there’s something very dark, determined and dangerous about her…When Amelia’s father, Roger, becomes ill, Jack grows suspicious that there is more to it. Amelia understands why, but no one else will believe them. They travel back to America to piece together the puzzle, but when Roger goes missing, the couple are driven to their wit’s end. It takes a DEA officer and a secret assassin to bring them any answers. The ruthless truth is something no one expected…

When you read the description of a book you immediately get a sense of the story and maybe even an idea of how things will play out. However I have to say that when I picked up this story I was surprised mainly due to the opening it set a chilling scene and I couldn't wait to see where the story would go from there. It has tension throughout but some of it is subtle and written in a way where it felt as if the story was getting under my skin. Almost as If I was taking on the anger and frustration felt by Amelia and Jack. I was definitely kept on my toes in regards to the plot and wondering what would happen next.

I have to mention Evelyn's character she is very intriguing but her moods and manipulations were awful to see. Taking their toll on everyone involved but I just couldn't stop reading, Gilding The Lily definitely made for an addictive read. The story is told from different perspectives so the reader can see the full picture and experience the characters emotions as everything unfolds. There is the wonderful contrast between Evelyn and Amelia's characters they were opposites but this made them such brilliant characters.

It's a story of a very complicated family with secrets and lies lingering just below the surface waiting to jump out. The story moves steadily increasing the tension perfectly with some surprises along the way to keep me completely invested in the story.

Gilding The Lily is an intricate story with a wonderful creeping tension throughout, five stars from me!

With thanks to Justine John for my copy. This is my honest and unbiased opinion.