The Girls in the Water by Victoria Jenkins @vicwritescrime @bookouture #Review

So for the new year I have set myself a little challenge to try and read some of the books that have been on my TBR pile for quite some time. My aim is to read at least one of these books every week hopefully I might manage more. With that in mind I picked up The Girls in the Water by Victoria Jenkins. 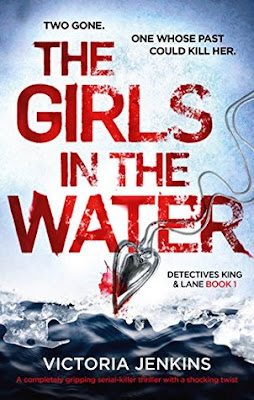 ‘The first one had been an accident. He had never intended to kill her. But as he looked down at her body, he knew there would be a next one…’

When the body of Lola Evans is found in a local park on a cold winter’s morning, Detective Alex King and her new recruit Chloe Lane are called in to lead the hunt for the killer.

Days later, a second girl goes missing. It seems the two shared a troubled history, and were members of the same support group. Who is the monster preying on these vulnerable girls?

As the detectives start to piece together the clues, Chloe realises that she too is in danger – as she uncovers secrets about her own brother’s death which someone will kill to keep hidden.

With any new series it can sometimes take a while to get a feel for the characters aswell as trying to set the scene for the murders etc. The Girls in the Water easily managed to grab my attention, the reader is introduced to Alex and Chloe along with the killer which was a great way to begin the book.

Usually in this type of story the book follows one main character along with a few minor characters. So I thought it made a lovely change to see two detectives as the leads even if at first I was little worried that the story could possible get lost trying to keep up with two characters. However I thought it worked really well and I became invested in both Alex and Chloe's lives. Both characters were developed well and I really enjoyed finding out about Chloe's back story. They both have their flaws which made them all the more interesting.

The killer is dark and twisted with Victoria Jenkins well and truly showing us what his victims must have been feeling. It definitely made for compelling reading and providing an addictive story. There are a few suspects in this book so I was never quite sure what to believe or who to trust. It's a story that kept me on my toes making things all the more interesting. The story moves at a pretty good pace and I was eager to keep reading to see where the story would go next. The Girls in the Water is a solid start to a fab new series and I can't wait to see what is in store for Chloe and Alex in the next book.

With plenty of twists, turns and surprises The Girls in the Water had some dark and shocking moments!

With thanks to Bookouture and Netgalley for my copy. This is my honest and unbiased opinion.