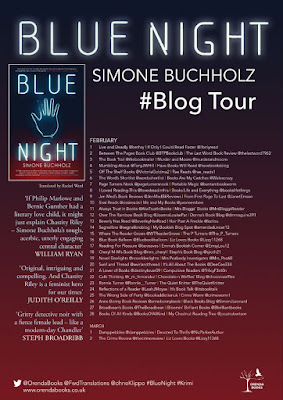 Thank you for stopping by I'm thrilled to be sharing my review of Blue Night by Simone Buchholz as part of the blog tour today. First of all let's take a look at the description for the book... 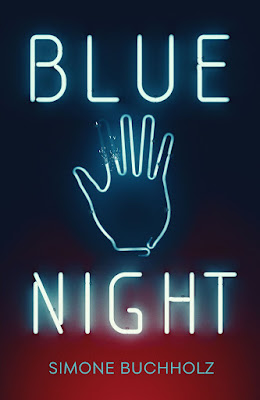 After convicting a superior for corruption and shooting off a gangster’s crown jewels, the career of Hamburg’s most hard-bitten state prosecutor, Chastity Riley, has taken a nose dive: she has been transferred to the tedium of witness protection to prevent her making any more trouble. However, when she is assigned to the case of an anonymous man lying under police guard in hospital – almost every bone in his body broken, a finger cut off, and refusing to speak in anything other than riddles – Chastity’s instinct for the big, exciting case kicks in. Using all her powers of persuasion, she soon gains her charge’s confidence, and finds herself on the trail to Leipzig, a new ally, and a whole heap of lethal synthetic drugs.

When she discovers that a friend and former colleague is trying to bring down Hamburg’s Albanian mafia kingpin single-handedly, it looks like Chas Riley’s dull life on witness protection really has been short-lived… Fresh, fiendishly fast-paced and full of devious twists and all the hardboiled poetry and ascerbic wit of the best noir, Blue Night marks the stunning start of a brilliant new crime series, from one of Germany’s bestselling authors.

I would have to describe Blue Night as being a bit like a whirlwind mainly because there was always something happening. Although at times especially the beginning I felt like I really needed to pay attention to what was going on. I have to admit this could be me finding it difficult to concentrate on character names etc. However this way of telling the story easily sets the scene ready for the rest of the book as the investigation begins.

Chastity Riley is a very interesting character and her life is definitely not straightforward especially after being assigned to speak to a man in hospital who has been terribly tortured. This case takes Chastity and the reader on quite a journey as she tries to discover who this man is.

The pacing is on the whole pretty fast and I was kept on my toes as to where the story would go next, the mystery surrounding the injured man easily kept me entertained. The chapters are short which helped to keep the story fresh and made me want to read more. I found Blue Night to be a different and intriguing crime story and I will be interested in seeing what is in store for Chastity next.

A solid start to a new crime series, four stars from me!

With thanks to Anne Cater and Orenda Books for my copy. This is my honest and unbiased opinion.