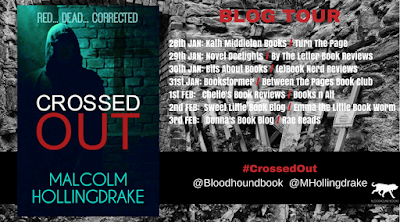 I'm delighted to be one of the stops on the blog tour for Crossed Out by Malcolm Hollingdrake and I will be sharing a brilliant guest post with you all today. First of all though let's take a look at the description for the book... 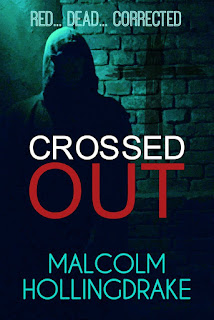 DCI Bennett and his team are back and called to a house in Ripon that has collapsed into a sinkhole where a body is discovered.

Soon old weathered Remembrance Crosses are found dug up. Each one numbered.

DC April Richmond is assigned to help the team due to her impressive biblical knowledge and soon makes a startling discovery.

Meanwhile, Gideon Fletcher is walking around the streets of Harrogate distributing religious texts. Is there a link between Gideon and the crosses? Do the crosses have anything to do with the body in the house?

Bennett and the team find themselves wondering if the killer is exacting revenge or punishment and whatever the answer, they soon realise the clock is ticking.

A key element that runs through the Harrogate Crime Series is the regular reference to Northern Art. If you take any of the six published novels you will find that at some stage one or two artists and their work are referenced.
When I set out to present the lead character for the series, DCI Cyril Bennett, I wanted to create an identity, a personality that would develop, yet establish him as the books unfolded. To do this I had to make him professional, certainly likeable, definitely intriguing and possibly vulnerable. These characteristics should, I thought, help to make him real. Many writers, I feel, include elements that they love whether it be cars or music. When I am writing Cyril’s part, I have to draw from my own experiences, my observations and my likes and dislikes… I think out of all my characters, Cyril has more of my traits than any other, as friends have said on more than one occasion they can hear me when Cyril speaks!
The art world has always fascinated me from a young age. Having had an uncle who trained at the Bradford School of Art, a contemporary of David Hockney, helped me begin to appreciate works especially those of the northern artists, after all my uncle was one; he became a respected commercial artist. My father was a good artist too specialising in watercolours. His detailed bird studies were amazing.
I soon found that I could draw and paint. I can clearly recall painting a picture of the earth from space when I was five or six. (Quite an abstract concept for a young child!) The painting remained on the classroom wall at Wellington Road Primary School for some time until the edges curled and the sun drained away the colour. Incidentally, this was the same school attended by David Hockney.
I was never truly academic. I was average at most things. However, I excelled at having my head in the clouds and dreaming. I seemed to lack the ability to concentrate, easily being able to drift off into my own world. As a child I could never listen to a story, as I would be asleep before the ending! My teacher solved the problem by giving me a brush and making me sweep the classroom floor! Art, linked with my imagination, however, was my saviour. At school I would often stand alone, different, confident and daring; this stayed with me right through to my art studies at Ripon Teacher Training Collage.
I simply love all things art and I have bestowed a similar passion on Cyril Bennett. I wanted him to experience the wonders of buying and selling pieces at auction, to enjoy visiting galleries and dabble in the investment world that can be art.
Bennett’s favourite artists are Theodore Major, Lawrence Isherwood, Ben Kelly and Adolphe Valette, three of whom are no longer with us. Cyril is introduced to the work of Ben Kelly, a successful modern artist, in “Dying Art”. These happen to be some of my favourite artists too. I have owned work by many of these fine painters and the joy of buying and selling was easily conveyed to Cyril.
Originally I wanted to give a brief description of the artist and works mentioned in each novel within the acknowledgements but for some reason this didn’t happen and has been a regret of mine.
I also believe that describing the paintings hanging in Bennett’s house in Robert Street helps bring continuity to the series. They are constants in a changing world. Bennett adapts as his life develops along with the other characters from book to book. For him it’s his place of rest and recuperation surrounded by the things he loves the most. I often describe him sipping a Black Sheep beer, studying one of his works of art whilst trying to solve a particular case.
I also found that using local galleries also gives credence to the settings. In “Dying Art” I used The Mercer Gallery as a key element to the story. At some stage I should like to use Bradford’s Cartwright Hall and Salt’s Mill as a setting within one of the books.
I do not know how many people read the Bennett books and then search out the work of the artists mentioned. I would like to think that some readers will take a little time to research them or the paintings mentioned.
Searching for and buying art is a hobby and a pleasure. The excitement of buying at auction is wonderful whether by phone, Internet or being in the room, each holds the same frisson and anticipation mixed with anxiety. I have bought painting from as far afield as New Zealand, France and many auction houses within the UK. However, selling is a little more disconcerting… I class it as an extreme sport!
I am now working on book seven. I feel sure that Cyril will again be in search of yet more pieces of artwork whilst trying to solve another Harrogate crime. I must look back and list the paintings mentioned within the books. Maybe I should bring them all together with a brief biography of the artist and a photograph of the described work… would anyone be really interested apart from Julie Pritchett? Probably not!

Thank you very much for reading the Bennett series. I hope that it has made you want to visit some of the places mentioned. If you can do try to see Harrogate if you have not already done so. I know that you will not be disappointed.