Thank you for stopping by I'm happy to be sharing a brilliant guest post by Val Penny as part of the blog tour for Hunter's Chase by Val Penny. First of all though let's take a look at the description for the book... 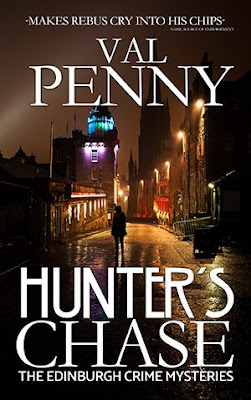 Hunter by name – Hunter by nature: DI Hunter Wilson will not rest until Edinburgh is safe.

DI Hunter Wilson knows there is a new supply of cocaine flooding his city and he needs to find the source but his attention is transferred to murder when a corpse is discovered in the grounds of a golf course. Shortly after the post-mortem, Hunter witnesses a second murder but that is not the end of the slaughter. With a young woman's life also hanging in the balance, the last thing Hunter needs is a new man on his team: the son of his nemesis, the former Chief Constable. Hunter's perseverance and patience are put to the test time after time in this taught crime thriller.

Reasons to Write a Crime Novel

People like crime, at least in novels! Often, I meet dentists and bank managers with clever plot ideas, or nurses who read every crime novel they can lay their hands on. If I visit a writing group, there are always members keenly producing new murderous plots. Lawyers and convicts show equal enthusiasm for this genre. For those who want to write a crime novel, there are several reasons to want to do so. Here are a few of them.

Emotional Release
Often, those who write crime novels find an emotional release in their craft. Crime novelists deal with the dark things that people usually push to the side of their minds in order to get on with every day life. The cathartic attraction of writing can be decisive.
Some crime authors tell of poor sleep patterns, punctured by night-mares that are repaired when they start to write. Others, panic, constantly scanning doorways for signs of danger. The stiffening fear that afflicts them resolves when they are busy writing crime.

The Story-Telling Urge
The sources for crime novels are many and varied. Ideas can spring from the news and current affairs; memories from the past and historical events or things that puzzle or fascinate the writer. Once an author begins to exercise their creative muscles, they often find that they run into stories demanding to be told. The stories demand to be told and will not stop coming.

For Companionship
It is often said that writers can be difficult people: gloomy, competitive and quarrelsome. However, for the most part, I have found crime writers to be an inclusive and convivial bunch. They are certainly hard-working. The pressure of producing a book a year is intense, yet they never seem to turn their backs on fun. If you have a chance to go to a crime-writers' convention, do take it. They are exhausting, exhilarating and irresistible.

An Outlet for Aggression
Most crime-writers will tell you that they are good company because they channel all their belligerent thoughts into their stories, so in real life, the authors are meek and mild. It is not always true, but I can confirm the a crime novel is an excellent place to park your rage! The prospect of giving vent to righteous anger in a safe form can be a particularly pleasing device. When characters require to act in a violent way or commit violence the reader is willing to witness this on the page but they would shy from it in real life. Crime writers can let rip on the page in a way they avoid doing in the real world.

The Thrill of Research
I can personally confirm that the research you do for crime novels and for academic purposes are equally satisfying. It is also extremely diverse. It may involve visiting prisons, refuges, police stations or drug dens. Police are often very willing to be of assistance to crime writers, even if it is just to avoid being irritated when otherwise the writers would get police procedures wrong. This information is most useful and helpful. Indeed, when you are writing a novel, no information or experience is wasted!

Erin Kelly – author of psychological thrillers including 'Broadchurch' and 'The Poison Tree'
“A gripping debut novel about power, politics and the importance – and danger – of family ties. Hunter Wilson is a compelling new detective and Val Penny is an author to watch.”
***
Stuart Gibbon – Former Murder Squad DCI & co-author of 'The Crime Writer's Casebook'
“A cracking read featuring the unforgettable DI Hunter Wilson.”
***
Kate Bendelow – author of 'The Real CSI: A Forensic Handbook for Crime Writers'
“An exciting debut – a police procedural that is refreshing, gripping and witty. I really enjoyed it and can't wait for the next one.”
***
Michael Jecks – author of unmissable historical mysteries including the 'Jack Blackjack' crime series including 'Rebellion's Message' and the 'Knights Templar' mysteries including 'The Last Templar' and the contemporary spy novel 'Act of Vengeance'
“This tartan noire book is a real coffee-cooler. I had three cups of coffee that went cold, forgotten while reading. Val Penny created a cast of characters I want to see in another book as soon as possible.
This is a truly astonishing debut from a writer to watch for the future.
Believable characters, gut-wrenching scenes, and a plot
that sizzles along. A taut police procedural that is up there with Ian Rankin, Alex Gray and Quintin Jardine.” 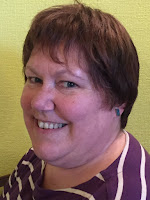 Val Penny is an American author living in SW Scotland. She has two adult daughters of whom she is justly proud and lives with her husband and two cats. She has a Law degree from Edinburgh University and her MSc from Napier University. She has had many jobs including hairdresser, waitress, lawyer, banker, azalea farmer and lecturer. However she has not yet achieved either of her childhood dreams of being a ballet dancer or owning a candy store. Until those dreams come true, she has turned her hand to writing poetry, short stories and novels. Her first crime novel, 'Hunter's Chase' set in Edinburgh, Scotland will be published by Crooked Cat Books on 02.02.2018. She is now writing the sequel, 'Hunter's Revenge'.
www.authorvalpenny.com
www.facebook.com/valerie.penny.739
Friends of Hunter's Chase - www.facebook.com/groups/296295777444303
https://twitter.com/valeriepenny
at February 13, 2018