Thank you for stopping by I have something a little different today and it's celebrating the publication day for Vicky & Lizzie's First Period by Andrew Mackay. I will be sharing an extract from Chapter one and also a song from the book too. 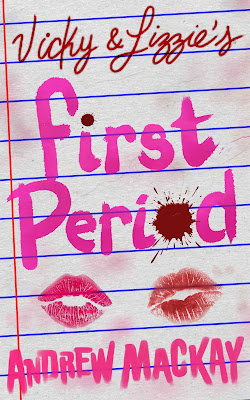 They kicked-off a false, nasty rumour
That one of the staff was a groomer
For everyone knows
Gossip spreads out and grows
But the school didn’t quite see the humour

Would Vicky & Lizzie regret
All the damage they caused? Nah, not yet
Scheming, conniving
The girls kept on vying
A dangerous precedent was set

Vicky & Lizzie delivered a blitz
On a school at the end of its wits
Did they care? Did they f**k
They were common as muck
Those nasty, vindictive young s#!ts

This might cause upset and uproar
It’s a musical satire, what’s more
For the first time ever
We promise you’ve never
Read anything like this before

So pick up your copy today
Of a story about which you will say
That I wanted to barf
But so hard I did laugh
Vicky & Lizzie have just made my day!

Lizzie slammed her rucksack on the wall outside the school. A torrent of students poured around them, making their way into the grounds.
Vicky pulled out her mobile phone and looked at the screen. ‘It’s only eight-twenty. We’re well early. How much did we get?’
Lizzie held up her hand and counted the gold and silver metal in her palm.
‘Dunno, hard to tell, I need to count it. Looks like about fifteen quid.’
‘It’s not enough, man,’ Vicky slapped Lizzie on the back. The brunette nearly dropped the coins to the floor. ‘We need to rake in some more cash.’
‘Be careful!’
The school buzzer blasted around the school ground entrance. Vicky looked over at the stone fountain that sat in the patio grounds. ‘Got any stuff left?’
‘Yeah, loads,’ Lizzie pocketed the coins and emptied the contents of her shirt into the rucksack. ‘Got all these fanny pads I stole, too.’
‘What are we gonna do with those, man?’
‘Dunno, yet.’ Lizzie zipped up her rucksack. She was about to lift it over her shoulders when a handsome young boy and his friend came into view.
Time seemed to slow down. The taller of the two boys, Jonnie Barron, shot Lizzie a shit-eating grin as they approached.
‘Hey, Jonnie,’ Lizzie said, fluttering her eyelashes at him.
Jonnie snorted and bopped his little bespectacled friend, Sam, on the shoulder. ‘Yeah, whatever.’
‘Have a good weekend?’
‘Yeah, mate,’ Jonnie chuckled. ‘Spent it wanking over your Skullbook photos, didn’t I?’
‘What?’ Lizzie gasped as Vicky burst out laughing. ‘That’s gross, man!’
‘Go fuck your Dad.’
Lizzie liked Jonnie, and made damn sure he knew that she didn’t appreciate his rude remark. Jonnie made amends.
‘I’m sorry, that wasn’t right.’
Lizzie looked up, ready to forgive his apology. ‘That’s okay, Jon—’
‘—I meant step-dad. He’s not your real Dad, is he?’
‘No.’
‘Cool. So you can fuck him and it won’t be against the law, then.’
Jonnie and Sam burst out laughing. They made their way past the stone font that stood in the grounds of the school.
Gobsmacked, Lizzie turned to her friend. She found the whole exchange riotously funny. ‘What are you laughing at, you cow? You think that’s funny?’
‘He’s such a prick.’ Vicky shook her head and made her way toward the school entrance. ‘Dunno what you see in him.’
‘He’s fit, that’s all.’
‘You can do better than Jonnie Barron, mate.’
Lizzie sighed and looked over her shoulder. She saw a little ginger girl run up behind her and whispered to Vicky. ‘Ugh, that little gingerbread doll’s seen us.’
‘Hey, Lizzie!’ Jody caught up to her, tightening a hair band around her ginger ponytail. ‘You okay?’
‘Uh, hey, Jody. Yeah, whatever.’
‘You hear from Layla?’ Jody asked. ‘She’s been off for a week, now.’
‘We ain’t heard shit from Layla Quick,’ Vicky said. ‘Where is she?’
‘She’s moved to another school, temporarily. Since that whole thing with Mr Galigan from Geography.’
Vicky, Lizzie and Jody pushed through the main school doors and into the entrance.
Staff members milled around talking to each other. Vicky turned to Jody as they walked. ‘What happened, then?’
‘What do you mean?’
‘With Layla and Mr Galigan?’ Lizzie butted in, losing her patience.
‘Not here,’ Jody whispered. She was scared members might overhear them. ‘I’ll tell you in tutor.’
The three girls made their way past the reception - and almost into the path of Mr Foster, the principal of the school.
‘Girls, mind where you’re going.’
Vicky made an apologetic face. ‘Yes, sir.’
‘It’s nearly twenty to nine. Go straight to tutor, please.’
‘Yes, sir.’
Vicky giggled to herself and winked at Mr Foster. He watched the trio walk toward the playground as the final morning bell sounded off.
‘What are you playing at?’ Lizzie asked Vicky.
‘What?’
‘Giving Foster the eye and being all like “sorry, sir,” like a proper teacher’s pet.’
Vicky pushed through the set of double doors that lead to the IT department staircase. ‘Oh, come on, Liz.’
‘What?’
‘Every chance he gets, he gawps at my legs.’
‘Eh? Does he actually?’
‘Are you really that stupid? He tries not to show it, but he’s definitely doing it.’
‘Ugh, that’s gross, man.’
Vicky and Lizzie gripped the stair rail and aided their two-at-a-time ascent up the stairs. Jody tried to enact the same but was far too small to keep up.
‘Wait for me, guys!’
‘Come on, you redheaded stepchild!’ Lizzie screamed after her. ‘Keep up!’
‘Don’t call me that!’
Jody reached the top step and disappeared into the IT corridor with her two chums.
The twelve-year-olds ran into the corridor with gay abandon. They were unaware that their lives - and the lives of the staff - were about to change significantly during the course of the week...


Vicky:
I wake up, first thing in the morning,
And think “How do I make myself look less rank?”
The answer is simple, Liz,
You can’t offer the driver a wank,
Us girls, we gotta make bank.
Oh, girls just gotta make bank…
Driver:
Oh-ho, girls, they wanna make bank.
Vicky and Lizzie run alongside the car.
The driver toots his horn and winks at the pair.
Lizzie:
We can’t afford
To buy all the stuff we want
With the shitty pocket money we get.
Our parents force us to go on the rob
Us girls, we gotta make bank.
Driver:
Yes, you girls,
You gotta make bank.
The pedestrians stop and dance with the pair of girls.
An elderly couple with shopping bags.
A young mother with a baby in stroller.
Vicky & Lizzie:
Girls, we want,
Want to make bank.
Pedestrians:
When the school day starts and stuff,
Oh girls, you just want to make bank.
Vicky and Lizzie run off with a hop, skip and a jump.
A flurry of school kids join them as they
turn into the school road.
Vicky:
Some boys think that Lizzie and I
Do it for attention and lols.
We want to be the ones that they never blank
So us girls,
We go and make bank.
The other kids line up. Lizzie opens her bag and takes the money from the school children who buy the stolen sweets.
Children:
You need to,
You just need to-oo…
Lizzie:
Us girls just,
Wanna make bank. 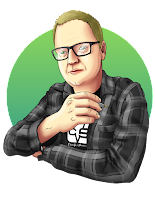 Some authors are afraid to cross the line.

My brand is satire.

I hop between genres like madman on crack because my razor-sharp literary knife is hungry for political and social commentary. One genre just can't cut it (if you'll forgive the pun.) I'm obsessed, I tell you!

I write straight-up humor and farce, horror, crime, romance... all under the banner of satire.

My novels often contain a ruthless commentary on society, delving into the darker machinations of modern life. They can be uproarious, funny, outrageous and shocking. Make no mistake, though.

My obsessions include (and are essentially limited to) obscene amounts of: smoking, drugs, alcohol, caffeine, sex, debating, daydreaming and writing about himself in the third person.


Join Andrew Mackay on Facebook for a virtual launch party tonight for a selection of author takeovers and giveaways.