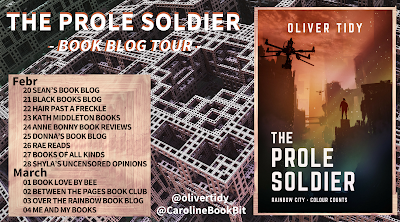 Thank you for stopping by today as I take part in the blog tour for The Prole Soldier by Oliver Tidy and share my review. First of all let's take a look at the description for the book... 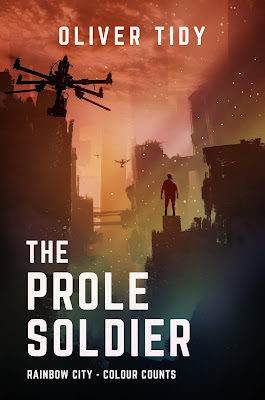 The Prole Soldier is set in a dystopian near future.

Theo lives and works in the Blue Zone of Rainbow City.

He is almost sixteen at which age he will begin four years conscription – military or mines. He wants neither. He hates his life and despises the cruelty, injustice and inequality that prevails.

When the opportunity arises for Theo to be involved in the fight for change he grabs it, knowing that failure will cost him everything.

I found the story really engaging especially getting to know Theo as he decides to take a chance at trying to make a difference to not only his life but the people he lives and works with. Even if it means taking a very dangerous path to make changes for the better.

As you read on you can see some influences on the story but they all blend well together to produce a story that will have you rooting for Theo all the way. The dystopian edge provides a desperate backdrop for the inhabitants of the Blue Zone and the descriptions of their lives is well written pulling the reader right in.

The pacing of the story is good and there is plenty of action that kept me entertained with a few twists equally keeping me on my toes. There is a varied group of characters that also give a good balance to the story. Some of my favourite parts were of Theo investigating the forbidden zones as bits of information are revealed also providing a few tense moments along the way. I'm really looking forward to seeing where this story will go next.

With thanks to Caroline at Bits about Books and Oliver Tidy for my copy. This is my honest and unbiased opinion.

Crime writing author Oliver Tidy has had a life-long love affair with books. He dreams of one day writing something that he could find in a beautifully-jacketed hard-cover or paperback copy on a shelf in a book shop. He’d even be happy with something taking up space in the remainder bin, on a pavement, in the rain, outside The Works.

He found the time and opportunity to finally indulge his writing ambition after moving abroad to teach English as a foreign language to young learners eight years ago.  Impatient for success and an income that would enable him to stay at home all day in his pyjamas he discovered self-publishing. He gave it go. By and large readers have been kind to him. Very kind. Kind enough that two years ago he was able to give up the day job and write full-time. Mostly in his pyjamas.

Oliver Tidy has fourteen books in three series, a couple of stand-alone novels and a couple of short story collections. All available through Amazon (clickable link to Am Author Page). Among his books are The Romney and Marsh Files (British police procedurals set in Dover) and the Booker & Cash novels, a series of private detective tales set in the south of England and published by Bloodhound Books. Oliver is back living on Romney Marsh in the UK. His home. He still wakes in the night from time to time shouting about seeing his books on a shelf in Waterstones.

For more on Oliver Tidy and his books, check out his website: https://olivertidy.com/