Thank you for stopping by I'm delighted to be sharing a promotional post for Far Cry From The Turquoise Room by Kate Rigby as part of a 1 day blog blitz. So let's take a look at the description for the book... 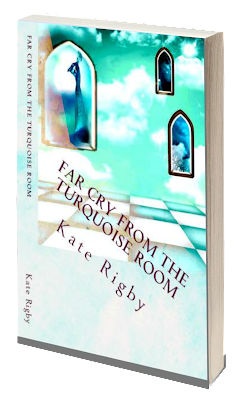 Told from both daughter and father's perspectives, Far Cry From The Turquoise Room is a coming-of-age, riches-to-rags tale of loss, resilience, and self-discovery, set just before the millennium. It is also about the passage of childhood into puberty.

Leila is the eight-year-old daughter of Hassan Nassiri, a wealthy Iranian property owner, and younger sister to the adored Fayruz, her father's favourite daughter.

But a holiday narrowboat tragedy has far-reaching consequences for the surviving family. Hassan withdraws into reclusive grief, when he’s not escaping into work, or high jinks with his men friends at his second home in Hampstead, leaving Leila to fend for herself in a lonely world of nannies, chess and star-gazing.

Leila eventually runs away from home and joins a family of travellers in Sussex, and so follows a tale of adventure, danger and romance – and further anguish for her surviving family. But how will she fare at such a young age and will her family ever find her? 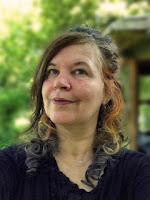 Kate Rigby was born near Liverpool and now lives in the south west of England.  She’s been writing for nearly forty years, with a few small successes along the way, although she has long term health conditions. Having been traditionally published, small press published and she is now indie published.
​
She realized her unhip credentials were mounting so she decided to write about it. Little Guide to Unhip was first published in 2010 and it has since been updated.

However, she’s not completely unhip. Her punk novel, Fall Of The Flamingo Circus was published by Allison & Busby (1990) and by Villard (American hardback 1990). Skrev Press published her novels Seaview Terrace (2003) Sucka!(2004) and Break Point (2006) and other shorter work has appeared in Skrev’s avant garde magazine Texts’ Bones.
​
Thalidomide Kid was published by Bewrite Books (2007).
​
She has had other short stories published and shortlisted including Hard Workers and Headboards, first published in The Diva Book of Short Stories and as part of the Dancing In The Dark erotic anthology, Pfoxmoor Publishing (2011). Hard Workers is to republished for a third time - in an anthology called ‘Condoms & Hot Tubs Don’t Mix’ - an anthology of Sexcapades - which is due to be published by Beating Windward Press in the US in February 2018.  It is her shortest ever story and yet the most popular in that sense!  All proceeds will go towards planned parenthood.
​
She also received a Southern Arts bursary for her novel Where A Shadow Played (now re-Kindled as Did You Whisper Back?).
​
More information can be found at her website:
http://kjrbooks.yolasite.com/

Or her occasional blog:
http://bubbitybooks.blogspot.co.uk/