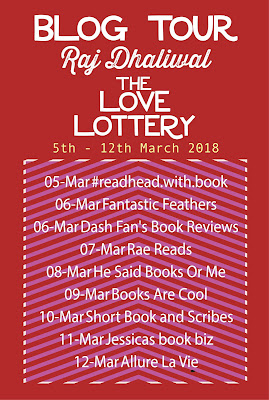 Thank you for stopping by I'm delighted to be sharing a great guest post by Raj Dhaliwal about his journey to publication as part of the blog tour today for his book The Love Lottery. First of all though let's take a look at the description for the book... 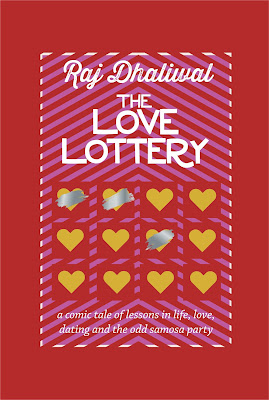 In our fast-paced digital age, never has finding the one felt more like playing the lottery. If anyone knows about the cruelty and chaos of dating in the 21st century it’s Raj Dhaliwal; accountant by day, hopeless romantic by night. By his own admission, Raj is a tax wizard but a clumsy disaster area when it comes to matters of the heart. This book charts his misadventures in the art of looking for love in an age when a man’s best intentions can be coldly dismissed by a swipe to the left. The Love Lottery: a comic tale of lessons in life, love, dating and the odd samosa party explores the emotional rollercoaster of dating, charting the epic excitement and anticipation, highs, lows and disappointments of our ever optimistic search for romance. As a British-born Indian gent, Raj compares and contrasts the social and cultural distinctions between his family, his friends and the women he meets on the dating scene; a route to romance that’s littered with speed dating, online dating and feverish matchmaking, in this funny and heart-warming book. As self-appointed United Nations Love Ambassador, Raj has made it his mission to date the weird and the wonderful in the pursuit of lasting love. Want to play The Love Lottery? Then read on.

The Journey to publication.

The intention was never to write a book, but merely to evaluate where I had come from in terms of relationships and where the future could be going forwards. The fact that it then became a book was coincidental as I am not an author. I am simply an accountant at a luxury car manufacturer.

Basically, what had started out as a couple of lines in a rant, had expanded into a couple of paragraphs and then slowly evolved into a document that then became a finished book with chapters.

It was only upon mentioning the fact I had written, what I would describe in a poor use of the English language ‘a kind of book, but not quite a book’ that my brother and some of our friends were intrigued.

The manuscript was printed out and my brother and his wife’s friends passed it around in their informal book club of sorts. The reason for this was to ascertain if it would appeal to all in terms of gender and race etc.

Apparently, a friend of my sister in law had been in absolute hysterics over one of the chapters. I subsequently had the same effect with a couple of my friends with whom I had read out a couple of chapters to over the phone.

‘You should get this published!’ they would exclaim.

Were they being over generous with the compliment or serious? I had no idea on how to go about publishing anything! The world of books was and still is completely overwhelming, daunting and alien.

In the day job, numbers could always be fudged and formula error blamed in spreadsheets, but writing something that all can see and critique would be either character building or character demolishing! What is written and printed cannot be taken back.

The precious commodity I think we all need to have a plenty is time but it’s common to hear people complain about the lack of time. Being a busy man in the day job and in addition to helping out in the family business also, I did also have a lack of energy let alone time available.

Therefore, self-publishing was not really an avenue I wanted or felt comfortable to pursue. I would have to do my own marketing and promotional work and trust corporations in ensuring that both parties got a mutually beneficial arrangement.

Google amongst other search engines then became my friend even more so. I searched for the top fifteen UK based publishers as well as listening to the book reviews on my way home from work on Radio 4’s A good Read and taking note accordingly.

The issue I found, and this is a sweeping generalisation, a lot of publishers whom I had contacted were after the next Game of Thrones or Scandi Noir Crime Thriller. My book did not fit into either of these or anything else they mentioned.

To say I was disheartened was an understatement. I had built myself up thinking that maybe there was a chance that someone or a group of people would be interested in my experiences and thoughts. I had basically taken time out to smooth off, as best I could, the edges of my book and poured out a part of me into it for all to read and now no one cared. What a waste of time and effort!

Then after having taken a step back and evaluating the scenario, I thought to myself ‘forget it, you are not an author, fortunately you have a day job in an industry you are crazy and passionate about, don’t stress and just come back to it in a year or so’.

That was exactly what I did.

Now and again my brother and some of my friends would ask me ‘how’s that book coming along? Is it finished? Is it published yet? What’s the score with it?’

It was only as a result of the constant questions when catching up with friends and family that I decided I had to do something about the book. The response ‘oh nothing’s happening at the moment, I’ve given up and not bothered with it’ did not go down so well. They had been expecting more, especially after having sample chapters read out to them.

I recall a certain book had received a lot of attention but was regarded by the literary world as well as the general public as not being well written. Poor use of grammar etc etc yet a couple of films had been produced as a result. This particular author had been good at E –marketing and promoting their work.

This was an avenue yet to be explored. I had nothing to lose. After some more searching online, I then came across Authoright Clink Street publishing.

After a few emails and phones calls explaining how the world of publishing worked and what was entailed, a new relationship has been formed. I felt relieved that my work was important and wanted. What I had to say and express was valid. I was valid.

My personal thought is the hardest part of the journey should only be getting the thoughts and ideas in one’s head and then translating those emotions effectively out onto paper and hope it comes across to the reader the way it is easy for the originator of those thoughts and ideas to understand. Nothing else.

We all have a story to tell and may one day want to express it.

Then again, it could be argued I am new and naïve in this world. 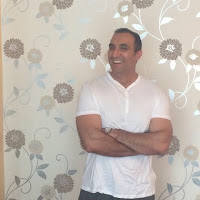