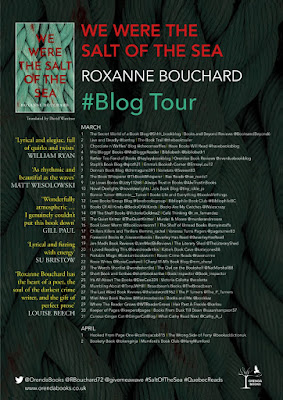 I'm delighted to be sharing my review as part of the blog tour for We Were the Salt of the Sea by Roxanne Bouchard. First of all though let's take a look at the description for the book... 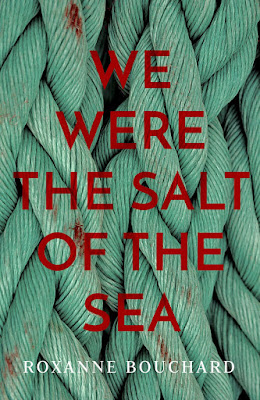 As Montrealer Catherine Day sets foot in a remote fishing village and starts asking around about her birth mother, the body of a woman dredges up in a fisherman’s nets. Not just any woman, though: Marie Garant, an elusive, nomadic sailor and unbridled beauty who once tied many a man’s heart in knots. Detective Sergeant Joaquin Morales, newly drafted to the area from the suburbs of Montreal, barely has time to unpack his suitcase before he’s thrown into the deep end of the investigation. On Quebec’s outlying Gaspé Peninsula, the truth can be slippery, especially down on the fishermen’s wharves. Interviews drift into idle chit-chat, evidence floats off with the tide and the truth lingers in murky waters. It’s enough to make DS Morales reach straight for a large whisky… Both a dark and consuming crime thriller and a lyrical, poetic ode to the sea, We Were the Salt of the Sea is a stunning, page-turning novel, from one of the most exciting new names in crime fiction.

The writing was descriptive and just seemed to flow effortlessly keeping me invested in the story. The setting is wonderful and I really felt as if I was right there with the characters and this was down to the beautiful writing from Roxanne Bouchard. I easily read three quarters of the book without even realising the time and I would have finished it in one go but unfortunately I had work the next day and sleep had to win.

Within this book there are some characters who easily peaked my interest first you have Catherine who is trying to find out about her mother. Catherine is a really intriguing character who I guess I never really got to fully understand but I think this is the point she is a mysterious and closed off person but this makes her so very interesting.

Then you have Joaquin who is in charge of handling the investigation into the death. I really enjoyed seeing this play out and the fact that this death has taken place in such a close knit community also introduces some minor characters that I couldn't help but be drawn to including a special mention for Cyrille.

An immersive, intriguing and beautiful story!

With thanks to Anne Cater & Orenda Books for my copy. This is my honest and unbiased opinion.

Ten years or so ago, Roxanne Bouchard decided it was time she found her sea legs. So she learned to sail, first on the St Lawrence River, before taking to the open waters off the Gaspé Peninsula. The local fishermen soon invited her aboard to reel in their lobster nets, and Roxanne saw for herself that the sunrise over Bonaventure never lies. We Were the Salt of the Sea is her fifth novel, and her first to be translated into English. She lives in Quebec.